Have a good look at the startling digital print, Revenge (from The Wolf You Feed series), by Aida Muluneh, that serves as the inspiration for this month’s writing challenge. And then write a story of no more than 250 words about the hidden assassin that lies in wait in all of us. Image courtesy David Krut Projects Cape Town.

The best entry, will, as usual, win a R250 book voucher to the indie bookstore of their choice – as well boasting rights.

Deadline is midnight on May 5, 2016. Paste your entry into the body of an email and send it to trish@allaboutwritingcourses.com

Tip of the month

I’m going to retail to you a little advice about describing characters that I found on The Guardian a few years ago. It comes, ultimately, from that master of terse and laconic, Elmore Leonard. He quotes a passage from John Steinbeck’s Sweet Thursday:

“I like a lot of talk in a book and I don’t like to have nobody tell me what the guy that’s talking looks like. I want to figure out what he looks like from the way he talks.”

And then he turns approvingly to Ernest Hemingway to demonstrate how little description can work: Regarding Hem’s short story, Hills Like White Elephants, he asks what the two characters – the “American” and “the girl with him” look like? This is all that Hemingway ever says about their appearance:

“She had taken off her hat and put it on the table.”

The story, if you haven’t read it, is Hemingway at his best.

We’re all tempted to give detailed descriptions of our characters. After all, we’ve spent a lot of time conjuring them into existence. We’re aware of that cute mole to the right of our heroine’s mouth; of the broad shoulders of our hero; of the tweed waistcoat that our antagonist favours… So why not tell our readers all this (and more)? Well, unless there’s a dramatic reason for describing them, unless the description tells us something significant about the character, then it’s not really justified.

And think of this: you could say that it’s the writer’s job to poke the imagination of her readers. The more actively involved a reader is in imaginatively engaging with the story and the characters, the better. And what more  stimulating a prod can you give a reader than to challenge her to build in her mind’s eye a picture of the character?

So take Leonard’s advice, and be parsimonious with your descriptions. 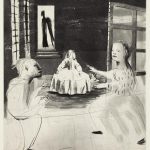