Monday Motivation: Is it a bird, is it a plane – no, it’s NaNoWriMo!

By Richard Beynon
Posted October 31, 2016
In Monday Motivation, Richard Beynon's blog
Monday Motivation: Is it a bird, is it a plane – no, it’s NaNoWriMo!2016-10-312017-01-19https://allaboutwritingcourses.com/wp-content/uploads/2016/12/final_logo_small.pngAll About Writing Courseshttps://allaboutwritingcourses.com/wp-content/uploads/2017/01/shield-nano-blue-brown-rgb-hires.png200px200px
0

Tomorrow, on November 1, tens of thousands of people around the world will settle themselves down at desks or in commuter trains, in the cramped quarters of tourist class in jet airliners, on their beds with their laptops propped on a pillow, or in the loo, with ditto propped on the laundry basket… and they’ll begin writing their hearts out.

Because, of course, for the dwindling numbers of you unacquainted with the phenomenon, November 1 is the start of NaNoWriMo – or, to spell out the rather awkward acronym, National Novel Writing Month, when the aforementioned hordes set out to write a minimum of 50 000 words of a novel.

Now, depending on which role models you pay homage to, 50 000 words is either a lot – or a little; a huge challenge, or a nonchalant doddle.

Nora Roberts, queen of the romance and science fiction police procedurals, writes ten novels – some of them great big family sagas – a year.

Or take Murial Spark, who wrote The Prime of Miss Jean Brodie – a perfect novel in so many respects – in less than a month.

If you don’t mind labouring under an even more towering shadow, think of Kim Jung Il – the former dictator of North Korea. His official biography tells us that during his three years at university he wrote 1 500 novels. Let’s assume for the sake of NaNoWriMo writers everywhere that those novels were short ones – say, 50 000 each on average. Well, my calculator tells me that that means that the genial autocrat wrote a total of 75 000 000 words. Let’s further assume that he was as diligent as his biographer insists he was, and laboured six out of every seven days  (on the seventh, he was no doubt on his private golf course attempting to better the magnificent 34 – 38 under par – that he scored on his very first excursion onto a golf course), then you’ll quail and quake at the thought that he wrote 117 370 words every day.

On the other hand – and you can be sure, fortunately, that there almost always is an other hand when you really need one – James Joyce wrote just 150 words a day when composing Ulysses, Jonathan Franzen took ten years to write Freedom, and Donna Tartt has written just three novels – big ones, admittedly – in well over thirty years.

So the question is, really: why put yourself under stress for thirty lonely days while you hammer out those 50 000 words? Put it another way, why has NaNoWriMo turned into the global sensation it is today? There are a couple of answers that spring instantly to mind.

It commands a prodigious effort of discipline. Writing an average of 1666 words a day (yes, that’s “all” it takes) will establish a habit of writing that will, in all likelihood, persist long after November 30. That’s a good thing. Why, if you were to write just, say, 150 words a day, five times a week, after seven years you too could end up with your own Ulysses. If you managed just 500 words a day, for five days a week, you’d spit out your common-or-garden 80 000 word novel in just 32 weeks.

And then it’s also true that if you’re writing freely every day for a month you’ll end up not just with 50 000 words (that’s the very least of your possible accomplishments) but with a distinctive voice.

Voice, as I might have said before, is that mysterious quality of your writing that’s as distinctive as it is indefinable. It’s made up the the way you use words; of the moral values from which your writing flows; of the rhythm of your sentences; of the vocabulary you deploy.

But, you might say, given the task of writing 50 000 words in a month might result in 50 000 bad words. Well, there’s a great deal to be said for the sage that argued that unless there are words on the page, however bad they may be, there’s nothing to edit. Rather have something to disparage (and improve), than nothing at all to go on with.

PS To find out a bit more about NaNoWriMo read this Q&A with Fiona Coward who is  Municipal Liaison for the Johannesburg region. 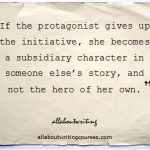 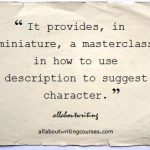