Writing Secrets: The “folksy” language debate – should you be using slang in your writing?

At a book launch I attended recently, the author was questioned about the great use he’d made of local slang, which embedded his new novel firmly in a time and place.

It was particularly conspicuous, the interviewer continued, since this was not a feature of his earlier novels.

The author, a writer I admire, explained that he’d been influenced by the philosopher Mikhail Bakhtin in his aversion to the “folksy” use of language to provide the colour and flavour of the day.

And now? He’d changed his mind. I was interested in this about-turn because it’s not something I’ve ever felt ambivalent about.

Sure, if that’s all you rely on, then your picture of a different time will be thin to the point of transparency. You can’t just throw in a slang word or two and expect us to be transported. I guess the aversion stemmed from the thought was that, if the slang was familiar, we’d be so charmed by our own feelings of nostalgia, we’d overlook the paucity of other detail.

In a greater construction, though, the language people use is, I believe, an essential part. Not only does it provide a context and help immerse us in a different time and place, but it provides us with clues about the characters and their culture.

What are their concerns and their prejudices? (Do they have words to refer to other groups of people?) What activities are so familiar that shortened word forms develop to refer to them? (As in this example from Adrian McKinty: “I bought a bottle of vodka from the offie and a fish supper from the Victoria Hot Spot. … I made a vodka gimlet, easy on the lime and soda.”)

This is not only true for novels in which we might recognise our younger selves and the language we used. If you write a piece of science fiction or fantasy, it’s up to you to create the language which will have the same effect.

You need to invent the kind of slang your characters would use in their world, in order to identify for us the way they live – their most common activities, their worries, the groups of people they hate and fear.

I’ve never heard anyone accuse Russell Hoban of being “folksy” or of cheating, for his inventive use of language in his post-apocalyptic masterpiece, Riddley Walker.

It had a job to do, one that it did exceptionally well. 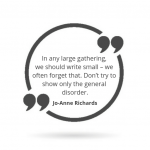