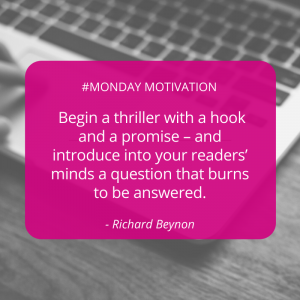 The most successful drama series of the year in the UK offers us a number of insights into the variety of means writers have at their disposal whenever they need to raise the stakes, heighten the suspense and tantalise their readers. Conceived by Tom Edge, who writes most of the episodes, Vigil is a tense and thrilling ride.

I’m going to list some of the strategies Edge employs, together with the examples from which I’ve drawn them:

The lesson:  Begin a thriller with a hook and a promise – and introduce into your readers’ minds a question that burns to be answered.

The lesson: Look for settings – yes,  we know you’re writing for the page and not for a production budget of millions! – that give you dramatic opportunities and lend themselves, believably, to thrilling situations.

The lesson: Being able to intercut between two parallel storylines gives the writer immense flexibility in devising cliff-hangers, contrasting pacing, and in generating anticipation and therefore suspense.

The lesson: In our era of instant and universal communication via cellphone and social media, it is often useful to find credible means to interrupt this flow.

The lesson: Cliffhangers work. Use them, whether you’re writing an international thriller or a gentle portrait of village life.

The lesson: You can never have too many forces of antagonism! Give your hero mountains to scale, chasms to leap across, pits to plunge into – and all the while remember that the highest mountains, the widest chasms and the deepest are all internal.

We’re only up to the end of Episode 5 – but already it’s clear that we’re in for a roller coaster ride of rare distinction.

P.S. For those of you interested in the progress of the Priory Marina Lake cygnets, here’s the latest: all seven cygnets are already seasoned fliers.