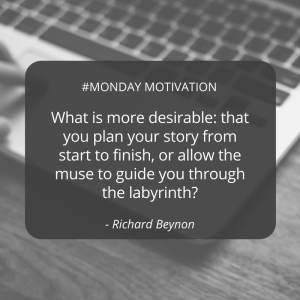 It’s a perennial question – and it came up again on the webinar we hosted last week in The Hero’s Journey. What is more desirable: that you plan your story from start to finish, or allow the muse to guide you through the labyrinth?

Some people get very heated in arguing their positions on either side of this divide. I’ve been involved in conversations in which I’ve been accused, because I prefer to plan, of “writing by numbers”. Contrarily, I’ve heard, and read, arguments which insist that unless you have a clear idea of where you’re going with your story you might as well throw in the towel.

In the latest edition of The London Review of Books Seamus Perry reviews a book called Burning Man: The Ascent of D.H. Lawrence. His review illuminates Lawrence’s deeply cherished belief in the magical qualities of the novel, and in its capacity to surprise – not just the reader, but the novelist him- or herself.

Lawrence once noted, in a letter to a friend, that “I am doing a novel which I have never grasped. Damn its eyes, there I am at p.145 and I’ve no notion what it’s about.” And later, when he was writing Lady Chatterley’s Lover, he remarked, “The story came as it did, by itself, so I left it alone.”

This is to conceive of the writer as shaman, the conduit of mysterious inspirations that he transmits to the page, of whose import he is sometimes himself ignorant.

Perry writes that Lawrence “loathed novelists like Flaubert, whom he conceived to be control freaks, and whose books were ‘carefully plotted and arranged developments’, quite lacking the crucial quality he called ‘unexpectedness’.”

I write as someone who does like a plan.  But I’m also aware that some of my best writing has surprised me, some of what I consider my most inspired ideas for story have seemed to ambush me. They were not part of the plan.

And yet I’m quite certain that despite all his protestations – and the protestations of other writers like Ian Rankin, and Donna Tartt, that they don’t invest any time in plotting – Lawrence was, in fact, possessed of a secret plan even as he “spontaneously” wrote masterpieces like Women in Love and The Rainbow.

Why can I be so convinced of something that he denied so vehemently? Because, dear readers, I think that we all unconsciously absorb the principles of story architecture from our cultural environment.

From the time our parents read us bedside stories, through school and beyond, the more we read, the more stories we hear told, the more our own experience of life expands, the more we lay down in our literary unconscious the basic tenets of story structure.

Our own experience confirms the patterns of the stories we read (and watch): every critical life passage we pass through echoes and repeats the twists and turns of story, and, incidentally, of Joseph Campbell’s Hero’s Journey. This is no accident, because story has always played a vital psychological role in our lives, celebrating our triumphs, lamenting our defeats, preparing us for the winters to come. The substrate of story is drawn from life.

And so all Lawrence was doing, I believe, when he let his writing hand be guided by the unseen muse which he believed was wiser than the novelist himself, was giving the deep story structures that he’d absorbed over a lifetime free rein.

Which leaves us where? Well, I will continue to plan – but I’ll allow that deeper wisdom to assert itself in my characters and my stories’ surprises.

P.S. Another Lawrentian insight Perry quotes that I think is worth retweeting is this: “If you try to nail anything down in the novel, either it kills the novel, or the novel gets up and walks away with the nail.”