Nicola Benedetti is a Scottish violinist. She burst onto the musical firmament when, at the age of sixteen, she won the BBC Young Violinist of the Year award. She has played with many of the great orchestras of Europe and America and is the winner of a Grammy for her performance of the trumpeter Wynton Marsalis’ composition, Violin Concerto: Fiddle Dance Suite.

She is, in other words, something of a phenomenon, still only 34, and at the very top of her game.

I watched a compilation on the BBC of some of her best-known performances, spliced together with snatches of interviews – and it is with what she said rather than what she played that I’d like to weave a few thoughts.

The first is that artists of all kinds, and in each of their magisteria, share a remarkable number of processes. Think of what Benedetti said, provocatively, about the relationship between creation and the cognitive process:

Years ago I wrote a documentary about children and their music. I called it The Left Hand of Language because that’s precisely how I sensed what was happening in children’s heads (and maybe, all heads) when they’re playing a musical instrument. Music takes the place of words, and since words are the building blocks of thoughts (I imagine), if you escape words, you also escape thought.

When as a writer you’re immersed in the creative process, putting together the elements of simulated life, although words of course are your currency, I think it’s true to say that something is going on that is not thinking, which requires a thinker, separate from their cogitation. Writing stumbles when the writer becomes self-conscious.

At a different point in the programme, Benedetti said something else that seems, in my view, to buttress that point.

“What comes out of the violin I never hear as the violin… I just hear me.”

When I’m writing, it’s not me that emerges on the page at all. The voice that speaks most eloquently feels like someone else. It’s as if, don’t you think, that the writing itself has its own personality, an identity that has, in some sense, declared its independence of the writer?

But then, less philosophically, but just as interesting from a writer’s perspective, was her next observation. Speaking of classical music in general, Benedetti said, “Everyone should hear this music and everyone should experience what I’m experiencing and everyone should feel the emotions I feel when I when I play them and when I listen to those pieces.”

That, after all, is why composers compose their music, to invite listeners in, to have them share the sensations and the feelings that inspired and guided them. And it’s why writers write, to generate in their readers the feelings, both high and low, that they, the writers, experienced and are attempting to transmit.

And here’s what Benedetti said about the compulsion that drives her to play: “Even if I don’t have a concert I have a violin that’s sitting there saying, ‘We have to practise’.”

Writers and musicians, artists of all kinds, will recognise the essential truth of this final reflection: “I suppose this is what I’m meant to do… so it’s what I do.”

PS – Don’t forget our Black Friday special of a massive 50% discount on all online courses. Use the coupon code bf50 when shopping in our online UK shop or our South African shop. The offer expires at midnight on 30 November. 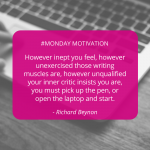