The hidden secrets of writing

By Richard Beynon
Posted January 25, 2023
In All About Writing, Books, Creative Writing Courses, How to write a book, Tips for Writers, writers
The hidden secrets of writing2023-01-252023-01-25https://allaboutwritingcourses.com/wp-content/uploads/2016/12/final_logo_small.pngAll About Writing Courseshttps://allaboutwritingcourses.com/wp-content/uploads/2023/01/front-cover-pleasures-of-the-harbour-scaled.jpeg200px200px
0

We’re launching a series of blogs, The hidden secrets of writing,  that will, we hope, achieve two things. Firstly, they’ll introduce you all to extracts from various books that past students of our Creative Writing Course have written and published – and secondly, they’ll identify writing skills and techniques that they’ve used in their writing. We’ll end each blog with a tip or two (or three) suggested by our analysis of the chosen passage.

Let’s start with a scene from the novel written by Adam Kethro called Pleasures of the Harbour*, a business thriller based on incidents drawn from his own experiences as the founder of one of South Africa’s largest logistics companies.

In this little reflective scene, the hero, also called Adam, is at his lowest ebb. He’s just spent a very dirty weekend with a client and a couple of women in the Okavango Delta but it hasn’t served to distract him from his problems. His second marriage has collapsed. His company is in deep trouble. He has lost confidence in his own abilities.

That night, in my empty house, I settled down in bed with a small nightcap and my thoughts. I should have been feeling on top of the world. I’d just spent an uncomplicated weekend in which every physical appetite had been more than satisfied.

So why could I feel a worm of dissatisfaction working its way through my bowels? A sense that I was not in control of my own destiny.

Somewhere outside a car braked, its tyres protesting. I could imagine it going into a long skid, turning sideways, flipping over, tumbling down the embankment. I closed my eyes, waiting for the inevitable sound of metal buckling, glass shattering, the final collision which would mark the end of some poor bugger’s life – and perhaps of his family’s as well.

But it didn’t come. The driver must somehow have threaded the needle, avoided the head-on, escaped with his life.

I took a deep breath. I wondered whether I’d heard the sound of the near-crash, or invented it. Perhaps what I’d heard was my own life spinning out of control.

This is a modest scene: just one character and his thoughts. There is no dialogue. There is very little action. And yet it marks a pivotal moment in the story. It sets up the hero’s determination to turn his life around, to take charge and make amends.

Although there’s hardly any action, it is in fact a very dynamic scene. The writer’s use of the near-crash outside as a metaphor for his protagonist’s own loss of control animates the scene nicely.

The hero’s voice is a good one. It feels honest and authentic. It’s intimate: here’s a character talking directly and idiomatically to the reader.

What tips could I draw from the scene? Well, firstly, you should always make room for your protagonist to reflect on events. Remember, stories are not really about events at all – they’re about characters’ responses to events.

Secondly, it’s worth taking time selecting the point of view that serves your story best. First person is the most intimate of them: it gives your reader a ring-side view of the hero’s second-by-second sensed experience.

And thirdly, it’s possible, even with the quietest scenes to write with a crackling intensity.

These are all points we make in our Creative Writing Course, which is designed specifically to equip you with a full range of practical writing skills which will enable you to tackle any writing project, however ambitious.

Over the course of this year,  as I said, we’ll be selecting pieces of writing from past students’ published work to point out what works, and why.  At some stage, we’ll also encourage you to submit a piece of your writing and we’ll choose from the submissions three extracts to highlight in this way.

*  Available through Takealot, Amazon, and all good bookshops. 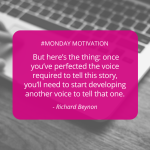 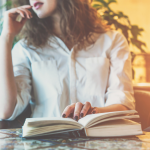 Last chance – 25% off our Online Creative Writing CourseHow to write a book, Invitations