A superabundance of wonderful entries poured onto our sceens for our March competition. The challenge was, you might remember, to use this Kentridge linocut courtesy of David Krut Projects Cape Town, as the inspiration for a story. Now, we’re not sure what it is about the image, but something in it clearly evoked the most wonderful ideas and memories.

At the end it didn’t matter. At the end she was alone. David and Marilyn in Australia sent emails professing their guilt at not being able to come (and cc’ing her Attorney to seek assurance she had a current will). Marlow sent a hand knitted blanket from Canada which the Matron promptly confiscated on the grounds that it was too delicate for the Home’s Laundry Service to manage; The pinks and greens went beautifully with the new duvet cover she’d bought for the spare room.

Ellen lay oblivious under the beige candlewick bedspread and the sensible machine-washable polyester blend blanket and stared at the tree outside her window, the endless wittering of the birds blending with the scrabbling chaos in her mind.

At the end it wasn’t passion or pain that crossed her mind. Not David’s handsome face, or that of the beautiful Lily who took him. Not the children’s flight to the ends of the earth. At the end it was simply a fragrance – the orange and peach in the bowl on her side table blending with the jasmine at the window, and Ellen was two years old again, sucking her thumb as darkness fell in the nursery, the softest hint of Arpege lingering on the air in the wake of her mother’s evening kiss.

The suspended dust floated slowly down, and rested on the soldier’s heavy eyelids. His muscles were taut with tension and fatigue, his arms lowered slightly with every breath.

The mother remained still at the entrance of her hut; guarding; saying nothing, only looking. The smell of the meat she was cooking still hung in the air.

Suddenly a squawking chicken fled the scene like a fugitive escaping Sodom and Gommorah. The soldier’s gun quickly scanned the perimeter. All clear. The stalemate resumed.

Some dust traveled up his nostrils and tickled the base of his throat. He cleared it.

The mother shot a furtive look at the house behind her. Who else was in there?

“Tell me” the soldier demanded.

The mother coughed. The child came out and ran away.

The rifle, again, was swung around, wildly this time, pointing after the boy’s retreating frame. The fleeing boy did not look back.

“Please-” she spluttered. The barrel rounded back on her. “If you have no eyes, then use your heart”.

His heart? The soldier was suddenly aware of it beating. It thundered against his ribcage; he needed air. The dust was weighing everything down, the air, his gun….his knees…

She was making a run for it when he finally looked up. There was a tickle at his throat again, he took aim and fired. When the dust rose and blanketed her crumpled frame, he got up, brushed the dust off his knees and began the long walk back home.

When the World Was Young by Denise Clur

I remember when the world was young. My Grandfather’s wooden waggon carried the sweets he made. He showed me how to feed coconut ice mushrooms on the flat of my hand to the black horse Popcorn. I remember the horse’s stained teeth and the springy bristles under popcorn’s chin, the smoothe grain of the wood worn thin and grooved  on the waggon sides, the suspended iron step, Grandfarther’s  white Walrus moustache. I was three.  Grandfather vamped on the piano. Grandmother’s clear voice trilled to  Music Hall songs from the London they had left.  They had sailed to South Africa in 1900 with my Grandmother’s pottery hot water bottle and Singer sewing machine. He looked like Humpty Dumpty in the faded crimson  chair. I remember the white ‘bust bodice’ with buttons that connected this under garment to cotton “broekies”  with elastic round the legs.  I was only wearing these late in the day. The paraffin lamps were lit. My Aunt took her mother out through the kitchen, through the  wild yellow Fennel, to the outhouse. Glass bottles of the tantalus  gleamed on the sideboard. I danced the Humpty Dumpty dance – my Mother told me that was enough! They played bridge in that nostalgic house  opening  onto the street. I slid under the fringed green baize table cover and hugged the ruggedly carved table leg – stout refuge from the malice seething above . So many years ago, when the world was young.  I remember – and  loathe card games to this day.

Their beloved grandmother was 98 when she died. On a bitter and blustery afternoon in January, when all her grandchildren were in Amsterdam, they decided to scatter her ashes in a pond in the Vondelpark, alongside a beautiful weeping willow.

Hans and Martijn hacked a gap in the ice and then, with distracted hands, they and Nienke, Gertie and Maartje dipped into the wooden urn in turn, scooped out a handful of the ashes, and let Oma slip through their fingers into the icy water. As a final farewell, Hans hurled the remaining ashes into the air. A nasty gust of wind blew the dust right into Gertie’s face – a Big Lebowski moment: surreal, quirky.

Afterwards they had a mug of hot chocolate at ‘t Blauwe Theehuis, but Gertie could not stop sneezing. The following morning she phoned her sisters and cousins to say she could still taste Oma.

News of death is never untrue; could be why reading the obituaries had become their “thing”. For lovers whose lips were sealed by lies and secrets, death was welcoming piffle.  “Died of sudden illness?” he scoffed “More like the wife poisoned his coffee.” he belabored his point with a slurp of the brewed coffee his wife just handed him.

“Coffee is too easy; a couple of pills in his brandy and you’ve got a suicide.” His wife figured as she sat down beside him in the kitchen nook.

There was something deliciously Freudian about twisting an obituary of a stranger into a murder. It’s eerie the way they chit chat about it, as if they were reviewing a movie or book. You could have been fooled, but not faulted, to believe they were two writers merely discussing plot.

News of death is never untrue, they knew this as the surest thing as they had spent every morning of their forty-five years together talking about ways they were going to kill each other.

Rory was found in a shoebox outside the Tokai KFC, his life still counted in mere days. Touch and go, the vet had said.  So Mr X had touched him and fallen in love.  Mrs X … well, she would rather have seen him go but marriage calls for compromise.

“His chest looks like a spare ribs order from Spur, for heavens sake.”

“The vet said he’s fine … it’s his breed. Being thin is not dying.”

“Why is it that whenever I’ve just got your dinner ready, you decide to take that dog out for a walk.”

“It’s the coolest time of the day.”

Dog whines: Exactly, yes. You’ve no idea how hot it is in fur.

“And the darkest. You, who always say, “darkness robs one of ones rights”. Just wait till morning, can’t you? Let’s eat.”

Dog says: You never know what you are called for.

Colonel Oladapo stood in the incessant rain peering out at the point where the sea and sky merged in a heavy grey fog. He could feel raindrops sliding down the back of his collar. Lifting his binoculars to the horizon he could just make out a dark shape moving inexorably towards them.

The soldiers were huddled in the trucks keeping dry. He could see Captain Adebayo cupping the stub of a cigarette to protect it from the rain. Beyond them, the fifty transportation vehicles were lined up, sleek silver capsules, waiting to ferry the refugees to the camps.

He felt someone approach, and turned to acknowledge Captain Ijeoma who cleared his throat and raised his own binoculars to the granite distance, khaki shirt plastered to his back in the rain.

“It’s the sixth ship this week. Things must now be really bad up there.”

He grunted his agreement.

“One should not be too hopeful of a ship sailing from Europe”.

It was something his grandfather used to say. If he were still alive he would appreciate the irony of this situation.

An hour later the rain was easing and the ship was close enough to the harbour to be able to make out the faces of the refugees on board. Pale and haunted.

Colonel Oladapo sighed. There were so many of them, and they just kept coming.

He stares into the night.  You two came to The Sisters home on the same day.  I was called Cook .  Adonis was the delivery boy from the bakery in LAPIUS.  Each day I found extra loaves on the back step.  Why?  Perhaps an answered prayer from those hungry orphans.

Then that day!  When I opened the door I found the bread, crying, the covering sheet jumping. A note: ” His name is Adonis. His mother has gone. I must get the other five over the mountains before they come.  Please care for him, give him a little bread, perhaps some milk from your wife for I know that she too, is with child.”

I ran shouting, Adele, Adele!!  No answer, my beloved gone – in her place lay my son, Aaron.   So began the lives of Aaron and Adonis – twins, one Jewish one Muslim

Friday nights saw us sitting around the table, yumulkas and fezzes listening to zayde’s stories.  Stories of fighting the Russians, of stow-a-ways on boats to Africa, of   ”A & A Bros”  – the first shop in District 6

Now every Friday sees Adonis shuffling to the corner. He faces East and lays down his prayer mat.  Every Saturday sees Aaron walking to Shul.   They both give thanks for their father, the cook and each day they give an extra loaf to the “Sisters of Mercy”. They tell their story for the tree that burns will not forget it’s home. 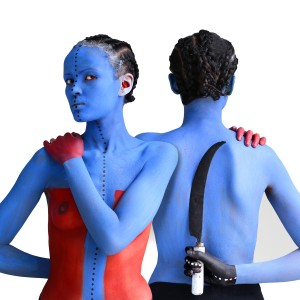 Have a good look at the startling digital print, Revenge (from The Wolf You Feed series), by Aida Muluneh, that serves as the inspiration for this month’s writing challenge. And then write a story of no more than 250 words about the hidden assassin that lies in wait in all of us. Image courtesy David Krut Projects Cape Town.

The best entry, will, as usual, win a R250 book voucher to the indie bookstore of their choice – as well boasting rights.

Deadline is midnight on May 5, 2016. Paste your entry into the body of an email and send it to trish@allaboutwritingcourses.com

Instagram
Today on the blog, Richard Beynon talks the secret