Our July writing challenge was inspired by another Diane Victor etching from the series Pandora’s Sisters courtesy David Krut Projects Cape Town. This one’s called After Eden. The challenge was to write up to 500 words of Eve’s interior monologue as she ponders her triumphs and failures, her regrets and her forebodings. 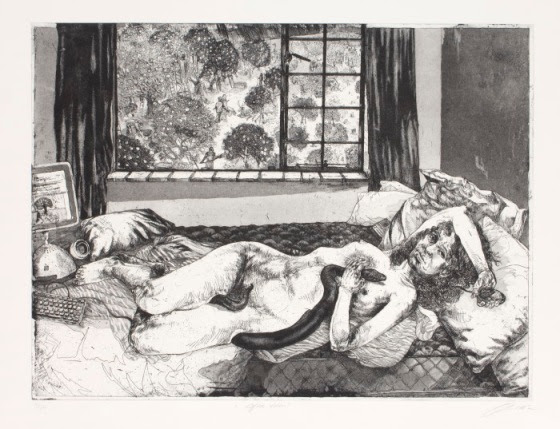 And the winning entries were:

Winner Sarah Woodward’s Cockney Eve finds a new self emerging from her encounter with the serpent.

Really, it’s been ages since anyone touched me at all. Certainly not ‘im. Not for ages and ages now. Just ‘ow long ‘as it been, actually? I’ll ‘ave to work it out in me ‘ead. Well, definitely not since the weekend that me and ‘im went down to see God at ‘is ‘ouse. That was a weird little ‘oliday. The two of them up all night, talking about them animals of theirs, working out their names, I fink. Not really sure since they don’t tell me nuthin’. It was all, “Well, you’re only made out of a rib bone, darlin’, not even proper dust it was, so don’t you worry your pretty little ‘ead about this stuff. Men’s work you see? Eh, darlin’?”

Bastards. And it’s not like ‘is work is so important. I seen them, those lists, pages and pages, just with names on ’em. “Categories”, ‘e tells me. “Sub-categories,” ‘e says. “Classes, Phyla, Kingdoms. Not that you would understand,” ‘e says. Well, I ask you, how’m I s’posed to understand when he tells me nuffin? Eh?

Not like this one. Doesn’t talk much this one, but what ‘e did say changed me whole blimmin’ life. I tell you, it did. So this one comes up to me and tells me all about ‘ow he knows that me ‘usband barely talks to me anymore. An’ I fink to meself, ‘e’s right. It’s not like those first days. Then it was a different story altogether, let me tell you. Lots of frolickin’ there was. And Adam looking me in the eye then, whispering them sweet nuthin’s in my ear an all. Pah. That doesn’t happen anymore. Like I said, it’s all ‘im and ‘Im doin’ important scientific work. Classification ‘e calls it. I musn’t bother him when ‘e’s workin’. But where was I? Oh, yes. At least this one listens. ‘E keeps trying to get me to eat apples, though. Its kinda weird. I fought he was some kind of ‘ealth nut at first.

“Its good for you,” ‘e says. Well, thanks very much but I get me five a day in just fine without eating no manky home grown apples as well, but ‘e’s rather insistent, ‘e is. “Just one bite,” he tells me.

So I took one. I mean, it was the least I could do after he did all them things to me, if you know what I mean. Nudge nudge, eh? Just finishing it up now, actually. It’s quite delicious really. Sweet, delicate. And… I do feel different, I s’pose. What am I doing with my life, if you actually think long and hard about it? I’ve never travelled, you know, settled far too early. This apple, I mean, its quite astonishing. I feel quite different, invigorated almost. Like… As if … I was… How can I put this….Full of unfulfilled potential. Yes. That’s it. Different. Stronger. Perhaps…Maybe I should ask him for a divorce?

Runner-up Suzette Leal has Eve reflect on a marriage that has started to lose its lustre:

Taking a bite out of that apple was the easy part. Getting Adam to do it was somewhat more challenging. I knew eventually he would agree to it. After all, he conceded to sacrificing his own rib once, so there’s not a heck of a lot I’d put past him. But, all things considered, I wasn’t looking forward to the argument. Upsetting the Big Man tops his list of things to avoid at all costs and I had to endure a somewhat painful, lengthy process of persuasion. Be that as it may, the outcome was fruitful.

Seeing Adam in his full glory was worth every bit of the preceding drama. Never have I experienced such exhilarating confusion as during our last two days in Eden. Not even Adam’s fear of authority and our imminent eviction could destroy my vigour (or his stamina). In a way, it actually made me look forward to getting away from the persistent watchful vigilante that hovered over us, our every breathing moment.

Finding a new place and setting up home on a mountaintop, not too far from The Garden, was a devilishly romantic time for us. In the beginning, we slept in each other’s arms under the stars, but nowadays we keep to separate sides of the bed, shelter underneath one of the permanent contraptions Adam has erected. He spends hours upon hours in his man cave, and I wonder if he’s as happy as he used to be. He so enjoyed his conversations with Hova and, at times, I feel responsible for robbing him of those. They still chat, I know they do, but Adam reckons after us hanging with the serpent and all, their connection will never be the same.

Our fight last night was the nastiest it’s ever gotten. He’s frustrated, he said. I’ll admit that the novelty of seeing Adam naked has worn off a tad, but he’s making a mountain out of a few incidents, which is just destructive and unnecessary. His holy friend would have told him the same if we were all still tight, and I actually believe that is the real reason behind the recent outbursts. I know his heart is broken about letting his friend down, but I feel completely powerless in my attempts at repairing it. If only we could get back to where we were, he seems so distant.

The only thing I can think of that will repair his current mood is to start a family. The extra company will be great for Adam. He always used to tell me how much he’d love to have two girls and a boy. Truth be told, before the apple episode we were all hoping for some little ones. Yes, that’s the answer… A family! I understand it won’t make everything perfect again. But at least our hardest, loneliest times will be over.

Runner-up, Lauren Maris writes a lovely piece that, although not strictly speaking an interior monologue, is never the less a striking scene about a thoroughly modern Eve.

Regret seeped in cold, snaking around the past and hissing into the present. It wound around her until she couldn’t think straight, until she wasn’t sure what she had done, just that it had been bad.

With her memory suffocated momentarily, Eve berated herself for a good few minutes as she lay, exposed, on the bed. She’d gotten out of a luxuriously lavender bath and, distracted by an Oprah special on TV, had sunk onto the sheets without reaching for her clothes. ‘… It was heaven,’ the interviewee had gushed, ‘to know I was marrying my soul mate.’ Oprah had nodded and ‘mm’ed with deep concentration. It was an exposé on couples who had married young, sometimes still in their teens, and how this commitment had altered the fabric of themselves. Eve had watched, eyes glued, thoughts oscillating between awe and disgust. How could these people tether themselves up so young? So naïve?

She couldn’t help but take every word that Oprah and the couples said and draw them close to herself, comparing and judging. ‘Love at first sight,’ ‘together forever,’ ‘bound by affection’… these phrases had leapt out from the screen and cluttered the bedroom, laying before Eve exactly what she didn’t have. And then the credits had rolled and a commercial for soap made reality sharper, leaving Eve noticeably without company.

What was she sad about, anyway? That she was in her forties and without a soul mate? She scoffed, ashamed of being such a cliché. A breeze rolled in from outside, making her unclothed skin produce a landscape of goosebumps. She wasn’t lonely, she was simply single. Thank goodness there was no one else around cluttering her counters and shedding onto the bathroom floor. And thank everything there was no personality edging into her own, making her forget herself.

Perhaps the real sadness was that she was happy. How lonesome it was to enjoy being one in a world full of twos, how exhausting to produce bravery and resilience every time she stepped out the door. She felt that her comfort was judged, warping it into something she should change instead of celebrate. She imagined an audience watching her now, naked for no one, fresh and clean for no one but herself. How sad, they would say.

Indulgence in herself – not a man, not her womb – had been her greatest triumph and her heaviest sin. When others saw that she’d partaken in her individuality, taken a delicious bite of it and chewed gleefully, they frowned and scurried away. How selfish to not have a husband or little Eves. It would have been so much easier to say goodbye to herself and dissolve into a partnership; at least then she wouldn’t have been so conspicuous.

But she was, and always would be, an odd amongst the evens. Another breeze whooshed through the window, hoisting Eve out of bed. She went to the mirror and smiled, then painted her lips bright red, even though she wasn’t going out.