Monday Motivation: Why do we write? Let me count the ways

By Richard Beynon
Posted November 6, 2017
In Monday Motivation
Monday Motivation: Why do we write? Let me count the ways2017-11-062017-11-05https://allaboutwritingcourses.com/wp-content/uploads/2016/12/final_logo_small.pngAll About Writing Courseshttps://allaboutwritingcourses.com/wp-content/uploads/2017/11/mmm-052f11-social-media.png200px200px
0

Why do throngs of people around the world feel the urge to record their thoughts and feelings and observations, but, more than that, to shape them into narratives that engage and enthrall others?

The internet age – with its promise of instant publication and worldwide distribution – has ushered in millions more writers who dream of firing the imagination of readers, and making a mint of money in the process.

But it’s not simply money that drives us, I don’t believe. Even the most commercial writers who crank out an annual thriller or detective story in time for the Christmas rush, are driven at least partly – and I suspect, mostly – by the thrill of creation.

Because it’s out of the threads and tangles of our imaginations, fed by our observation of the world and its players, that we weave our stories. And that act itself nurtures the powers of our imagination, and sharpens our observation of the world. There is instant reward and gratification for creating stories – and the more skillful we become at shaping these stories, the greater the reward.

Perhaps it’s because the act of writing calls on our whole selves in a way that few other – if any – activities do. Not only does it yoke the active and fluid imagination, it also calls on all our powers of critical reasoning.

Many of us have remarked on how totally lost to the world we become in creating our own universes. This is little wonder, given the complete commitment that writing demands and elicits.

Writing plays a subversive role amongst the snarls of our own prejudices. We might create a villain who embodies all the vileness we’ve encountered in others – and then find, when we stand in his shoes, that there are vulnerabilities and weakness present that, while they might not excuse him, make him human, and capable, therefore, of remorse and redemption.

One of the injunctions directed at writers of fiction is to give their antagonists the best arguments. Thinking your way into the logic of a bad character – or even a character very different from you – yields surprisingly good insights and will develop sympathies that could, not to put too fine a point on it, expand your moral horizons.

And then, of course, whenever a writer plugs in her laptop, or uncaps her pen, she embarks on a hero’s journey of her own that at once generates surprises, heart-stopping climaxes but above all direction. Every story you embark on constitutes a project with its own imperatives and goals.

Ursula le Guin, author of the magical Wizard of Earthsea, dwelt on what writing means to the writer. She wrote, “A writer is a person who cares what words mean, what they say, how they say it. Writers know words are their way towards truth and freedom, and so they use them with care, with thought, with fear, with delight. By using words well, they strengthen their souls.”

Perhaps we should encourage others to join the throng.

monday motivation, the power of writing, why we write, writing inspiration 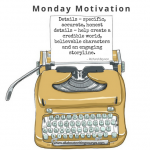 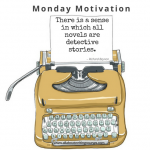