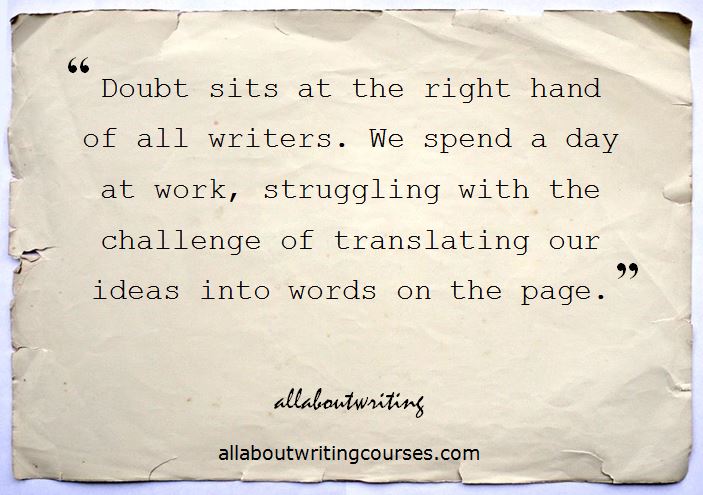 Doubt sits at the right hand of all writers. We spend a day at work, struggling with the challenge of translating our ideas into words on the page; struggling, too, with the perhaps more difficult task of identifying the specific emotions that we imagine our protagonist will experience; struggling to achieve a satisfying balance between the elements of character, plot, description.

And invariably, as we review what we’ve written, we feel that the perfect paragraph we’d sought to write has eluded us. I can’t track down the source of this idea – which seems to me undeniably true – but here’s its essence: Every writer starts off writing what he’s convinced is going to be a revelation, and is happy when it turns out not to be a cliché; it starts off, in his mind, as a glittering palace on a hill, shrinks during the course of composition until, at the end, it is no more an an unremarkable suburban house, whose corners are not quite square, and whose chimney stands askew, the victim of a storm that has not yet struck.

Zadie Smith talks of the writer’s “map of disappointments”. She imagines a writer whose book, despite his best efforts  “is not the perfect novel that floated so tantalisingly above his computer. It is, rather, a poor simulacrum, a shadow of a shadow. In the transition from the dream to the real, it has shed its aura of perfection; its shape is warped, unrecognisable…”

The fear of these outcomes haunts us all… Or do they? I came across a remark of Anne Enright’s, author of the The Gathering, which won the Man Booker in the noughties. She said with Irish forthrightness: Only bad writers think that their work is really good.

Well, there’s a thought. And it put me in mind of an acquaintance who has recently written a thriller which, in her estimation, is the equal of some of the best in the genre. As good, she has suggested with some satisfaction, as John le Carre; something to rival the best-selling books of Michael Connelly, Kathy Reichs or Patricia Cornwell…

I’ve read the book, and it seems to me that it’s in need of a thorough overhaul, with particular attention being paid to point of view, to the use of exposition, to the lack of dramatic imperative in many of the scenes. Characters are stereotypes, the use of cliché at times marked…

Is John le Carre in danger of eclipse? I’d say he doesn’t need to lose any sleep at the prospect.

The point is not that the book needs a rewrite – all first drafts need a rewrite – but that the writer is convinced that what she has written is a masterpiece. It’s that conviction that holds her back from rethinking what she’s written; it’s that conviction that stops her turning a mediocre first draft into a scintillating manuscript ready for launch.

Even the best of us have doubts. We should embrace them, because doubt is what drives our passion to improve what we write. Complacency is probably a great deal easier to live with – but it spells death to excellence. 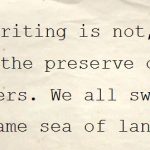