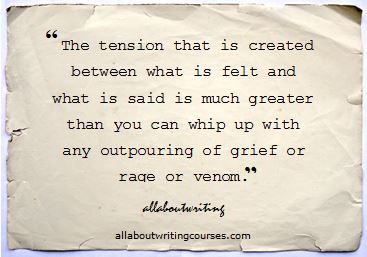 John Banville is the author of fifteen critically acclaimed novels one of which –  The Sea – won the Man Booker prize in 2005. Until he turned to writing novels fulltime, he was a journalist. But whether journalist or novelist he understands one critically important feature of compelling writing.

I heard him speaking in an interview on the BBC. His interlocutor was quizzing him about growing old – he’s turning 71 later this year. “When you’re writing about something like passionate young love,” he was asked, “is that difficult?”

His throw-away answer, brief as it is, contains a piece of advice that every writer should write down and pin to their fridge under a number of powerful magnets. This is what he said:

“You can’t write hotly about hot things. You have to write very coolly.”

Think very carefully about that. On the page, which is more powerful, the suppressed fury of a man whose fist clenches, whose face reddens, and who speaks in taut, clipped, controlled locutions – or that same man who lets loose in a series of cries of rage?

Well, of course there are occasions when you want your protagonist to have a complete hissy fit.

But for the most part, the tension that is created between what is felt and what is said is much greater than you can whip up with any outpouring of grief or rage or venom.

It’s all about not writing on the nose, of course – and it’s deeply counter-intuitive. Your protagonist is angry. He has every reason to be angry. You and I would be angry under the same circumstances. So why not have him be angry. Why not have him smash the plates and punch the wife? Why not have him utter every swearword you can find in the Urban Dictionary?

There is, I say again, a place for such behavior. But it’s usually not on the page.

Because we readers, we clever readers, intuit what the character’s going through when, instead of smashing the kitchen cleaver into the skull of the man who’s just insulted him, his wife, and his extended family, he simply sits at the table and waits for the blizzard of invective to blow itself out, then gets up and opens the door for his unwelcome guest to leave. We’re waiting for the protagonist to explode, of course, but we savour the reasons for his choosing not to.

Writing that is completely on the nose is, need I remind you, pornography. But the most arousing writing in fact doesn’t need to mention body parts at all – it can inspire desire by suggestion, by what’s not said and not revealed, by the withheld caress, by the whisper of silk.

So when you’ve come to a critical part of your story, where the strands of your narrative gather together, and you face a choice of having your protagonist war-whoop his way to the climax, or, like John le Carre’s heroes, smile and turn away, think carefully. The hot choice is not always the most effective one. 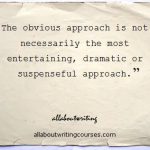 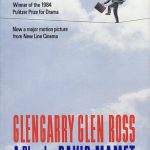