Monday Motivation: A big scene to support the centre of your tent 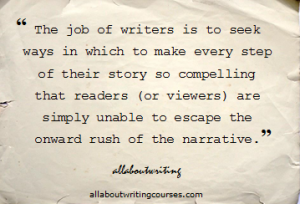 I’ve been researching film structure. Perhaps because there’s so much money at stake in every movie – and unthinkable fortunes at risk in many movies – a great deal of thought has been devoted to the tricks and techniques of writing good screenplays.

My particular focus on this occasion was the so-called Midpoint.  To contextualise the issue, let me outline the problem…

Films almost always fall into three acts. Well, so do stories of all kinds.

Acts One and Three generally take up a quarter of the screenplay each. If the film is 120 minutes long, then Act One and Act Three will each run for about thirty minutes, more or less.

Act Two, therefore, runs for a full sixty minutes. And this presents screenwriters with precisely the same problem that faces writers of novels, and, more generally, writers of any long piece of creative writing, whether fiction or non-fiction: how to sustain the interest of viewers or readers for that long?

The answer that screenplay theorists have come up with is this: ensure that your story rises and falls in waves of increasing tension and drama over the course of the Act. Make sure that the stakes rise all the way through.

Screenplay writers realised that a mid-course pivot helped them structure this Second Act. This they called the Midpoint. It usually consists of a scene in which the hero, or protagonist, rededicates himself to the task at hand. It’s a scene, moreover, in which the stakes suddenly become much higher than the hero had imagined. Often, the scene is a highly dramatic and memorable one.

My research consisted of combing through various films in search of illustrative Midpoint scenes. One of the best I found was in Jurassic Park. It introduces the Tyrannosaurus Rex as  the prime antagonist. If you’ve seen the movie, you’ll remember this scene. The approach of the T-Rex is signalled by ripples in a glass of water. Then a claw appears on the top of a massive fence, previously electrified, but now rendered harmless by a tropical storm. The T-Rex breaks through the fence, terrifies two children trapped in a car, before honing in on an unfortunate man who’s taken refuge in a toilet.

The scene culminates in the dinosaur snapping up his victim, crushing his body between those extraordinary jaws, and swallowing him.

Suddenly, the story which had threatened to become a kind of pastoral tale of sight-seers marvelling at the  creatures in a Jurassic park, turns into a struggle for survival. The Midpoint scene in Jurassic Park electrifies the story, raises the stakes, and catapults us into a series of terrifying episodes that led inexorably to the climax of the movie.

Now, the purpose of this posting is not to illuminate film structure, but to show that the job of writers is to seek ways in which to make every step of their story  so compelling that readers (or viewers) are simply unable to escape the onward rush of the narrative.

Not all stories have as their antagonists a group of bloodthirsty dinosaurs, of course. But however gentle the  predicate of your story, your task remains the same: to find the path that raises the tension and puts your protagonist under increasing pressure.

And actually, whether you’re writing a screenplay, a YA romp, or a scrap of romantic nonsense, devising a big scene to hold up the very centre of your tent is not a bad idea at all. 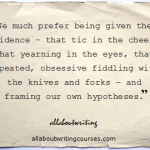 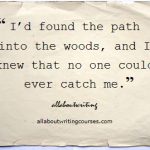