The secrets behind the practice of good writing: Time the punchline 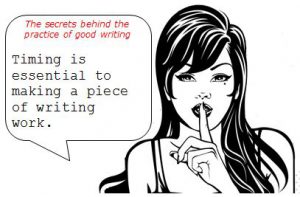 People always talk about stand-up comedians and their timing – but you seldom hear people comment on the excellent timing of writers. And yet timing is essential to making a piece of writing work.

You need to know when to hold back, and when to continue, when to pause and when to stop altogether. You need to sense when to set something up and when to pay it off (rather like the comedian’s punch line.) When you reach the exact point you should pull the curtain on a scene, you should feel it somewhere deep in your gut.

I think the best way to learn timing is to read a great deal. When I read this recently, I was struck by the great timing, and how it forced me to turn the page. It stops at a point where a good couple of questions still hang in the air. Nothing has been answered.

It’s just the perfect place to end this scene. Isn’t it great?

I’ve taken it from Maggie O’Farrell’s The Vanishing Act of Esme Lennox, Iris has just received a telephone call from a man she doesn’t know, who says he’s calling from a hospital – she doesn’t catch the name. He informs her that she is the contact family member for a Euphemia Lennox, someone Iris has never heard of. He confirms that she has power of attorney for her grandmother, who is in full time nursing care, then tells her that Euphemia is her grandmother’s sister:

Iris is really cross now. ‘She doesn’t have a sister.’

There is a pause in which Iris can hear the man moving his lips over his teeth.

‘I’m afraid I must contradict you,’ he says eventually.

‘She doesn’t. I know she doesn’t. She’s an only one, like me. Are you telling me I don’t know my own family tree?’

‘The trustees of Cauldstone have been trying to trace…’

‘Cauldstone? Isn’t that the…the…’ Iris fights to come up with a word other than looney-bin ‘…asylum?’

The man coughs. ‘It’s a unit specialising in psychiatry. Was, I should say.’

‘It’s closing down. Which is why we’re contacting you.’ 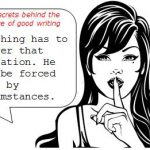 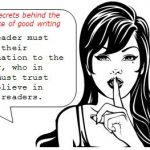