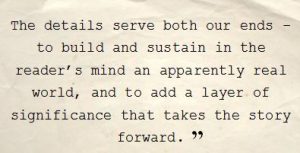 Consider for a moment the four-dimensional world you live in. You might well be sitting at your
computer at this very moment, reading these words… But a few minutes ago, or in  a few minutes time, you were or will be doing something else entirely different, perhaps.

You might decide to get the curry you’re planning for tonight on the go. While the oil heats in your cast iron pot, you slice the onions with a knife that you need to sharpen first to give it precisely that keen edge that you’re after. Then you add the cardamom, the cumin and coriander seeds, the bay leaves and the Kashmiri chilli flakes to the hot oil…

Or you might have been brewing yourself a cup of coffee. You added just two heaped tablespoons of the Kenyan blend you love so much to the plunger. You poured in the boiling water. You watched the coffee and the water rise in a swirl of foam to the top of your plunger. Your mouth watered as you anticipated the caffeine hit…

I cannot know your tastes or your routines, of course, and so I have no idea at all what precisely you do before you read your emails, or what you’ll do after – but whatever it is, it’ll simply be part of the mosaic of activities that make up your day.

The individual pieces of that mosaic are of extraordinary interest to writers. We will go to great lengths to report these quotidian activities, finding the right words to describe the making of the curry, or the brewing of the coffee. This is important to us for two reasons.

One of our first and most basic jobs is to help our readers accept without question the reality of the world our fiction plays out in. We begin by using a series of deft touches to suggest recognisable details of that world. The Kashmiri chilli flakes play a surprisingly big role in that task.

The second reason we seek to describe angles and corners of the world in which our characters exist is rather more subtle. We like to find details that are significant in some way or other. A mother who has lost her two-year-old to meningitis lingers in front of the baby store for a heart-stopping minute… A man caught in the snares of deep depression pauses for a second while shaving with an old-fashioned straight razor to examine his face in the mirror… and then continues shaving.

Or consider this scene that a writer on a short story workshop we held in McGregor this weekend wrote:

A teenage girl is being given a lift to school by her uncle down a gravel road peppered with potholes full of rainwater. He’s an old school conservative, quick to condemn schoolgirls for their lascivious ways, eyeing their short skirts with a judgemental frown, excited perhaps by their flashing thighs, but unable to reconcile the judgement with his desire. His niece is chattering innocently about a boy she’s met. As she describes her first encounter with the boy, the uncle, distracted by the images this conjures in his mind, hits a pothole… Muddy water splashes up onto the windowscreen. She tells him that she might ask the boy to give her a lift home the next day. Her uncle hits another pothole…

The scene plays out much more subtly than I’ve rendered it here. Those disconcerting potholes are much less obvious than this paraphrase suggests.

Those potholes though, which punctuate the narrative in a quite naturalistic way, also suggest what the girl’s uncle’s reactions are. He says nothing to indicate his furious response to the news of this potential love-interest in his niece’s life – and yet we’re left in no doubt about what his feelings really are.

It’s a really adroitly handled scene in which two things are happening simultaneously: a man is driving his niece to school along a potholed road, while she chats happily about a boy she’s met. At another level, we – but not the protagonist – are aware of her uncle’s profoundly negative reaction to the news. The “business” of the scene is doing double-duty.

Finding the details that serve both our ends – to build and sustain in the reader’s mind an apparently real world, and to add a layer of significance that takes the story forward – is one of the things that make writing both difficult and, ultimately, extraordinarily rewarding. 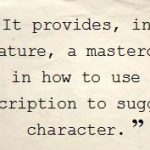 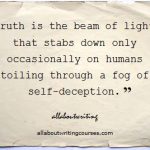