Q&A with Gail Gilbride Bohle author of Under the African Sun, part 1

By All About Writing
Posted January 12, 2017
In Mentoring, Tips for Writers
Q&A with Gail Gilbride Bohle author of Under the African Sun, part 12017-01-122017-01-12https://allaboutwritingcourses.com/wp-content/uploads/2016/12/final_logo_small.pngAll About Writing Courseshttps://allaboutwritingcourses.com/wp-content/uploads/2017/01/authoe-qa.png200px200px
0

Gail Gilbride Bohle, a past creative writing and mentoring  participant launches Under the African Sun on 25 January. We asked her some questions about her writing and publishing process.

How long did this book gestate for?

This story is the one I’ve wanted to write for 40 years, but I’ve been skirting around it. Finally it got coaxed out of me.

How many drafts did you write? Was it easy or difficult? Tell us a bit about the process, the ups and downs.

I wrote one draft and patted myself on the back.  Then Richard and Jo-Anne prodded me gently and reminded me about a second/third/fourth one! It’s easy to write the first draft. It’s difficult to go back and edit until the manuscript is good enough to send to publishers. Sometimes I dropped the ball. The mentoring programme really helped me to re-focus and carry on. There is no room for an ego here. I trusted my mentors completely and went with their expertise every time… except for my character Boetie.  I clung to him and defended his right to stay!  (I did work on his role though.)

Is writing an unalloyed pleasure for you?

Yes and no! I am a bit obsessive about writing. I feel it bubbling up inside me and then I have to put whatever it is down on paper. At the same time, a little voice in my head pipes up with, “this is not good enough!”  That’s where free writing comes in and the voice is on “pause.” Editing can wait…

What constitutes the greatest challenge for you in your writing?

Self-doubt.  It’s imperative for me to switch off my critic until I have told my story.  I know that I can spin a yarn.  I was also accused of “embroidering,” as a child.  But I had to learn to embrace the editing process and realize that unlike Shakespeare, I needed to go back and polish…often more than once.

You’ve successfully integrated a love story into the political turmoil of the seventies. How did you go about doing this?

I was finishing off my Politics degree at Rhodes, in 1976, so I lived through the turmoil in that year and the many to follow.  Under the African Sun is definitely fiction, but I drew on real events for my inspiration.  I remembered all the turbulence and as I was writing it down, emotions re-emerged. I travelled back in time and experienced those years in my imagination.

Was any research necessary or did you rely on your own experiences?

I did rely on my own experiences at first, but then backed them up with some research, often prompted by my mentors. Richard and Jo-Anne pulled me up, when I was relying on the “glide past” effect and encouraged me to check my facts!

How clear an image of your novel did you have in your head before you began?

I had the skeleton of the story firmly in my head. But the characters I’d created came to life and sometimes took the story in unexpected directions.  I tried to discipline them, but to no avail. Boetie in particular, became quite headstrong!

What are your top five tips for other writers?

If you have the passion, keep writing and do not give up!
Write from the heart and in your own unique voice.
Only allow a small circle of trusted writers/editors to read your work, until it is published.
Free write daily and turn off that critical voice in your head.
Absorb what your mentors are telling you, even if it means major re-writes
And a 6th…If I can do it, you can too!

You are invited to the
launch of Under the African Sun

Gail is a English/Communications Skills lecturer and lives in Hout Bay, Cape Town. She holds a Bachelor of Arts degree from Rhodes University and a Post-Grad teaching Diploma from UCT.

Under the African Sun is published by Cactus Rain Publishing

Here’s an excerpt from Under the African Sun

She felt the life return to her legs, and she turned and fled with the others.  The sound of Annie’s pounding steps just behind her gave her the courage to run faster, harder. When her legs gave up, she turned back towards her friend. Annie was gone. Shit! She looked around wildly.

Her screams echoed around her. She’d lost them.  She ran towards a young man huddled against the pavement.

Her eyes still stung but she was beginning to see again. She followed the now smaller crowd to St George’s Cathedral.  Her eyes scoured the pews quickly as she squeezed into the shadowed interior, past the crowd at the massive doors. No sign of Annie or Nigel.  Her heart pounded and she turned away and walked back to the newsroom. The sound of sirens echoed down Adderley Street. People ran in the other direction, to the sanctuary of the cathedral. She dodged a police patrol car, as she wound her way between people and resisted the urge to throw up. What if Nigel was badly hurt? And where was Annie?  She shouldn’t have left Nigel’s side.  She should have made sure Annie was behind her. She’d let them both down so badly. She’d never forgive herself if either one of them was hurt. She forced herself into a jog now. The comfort of the newsroom propelled her forward. With immense relief she found herself back in the newspaper’s building at last.  As the lift door opened, she stumbled out into the familiar, comforting territory of the newsroom.

Nigel steadied her as Annie reached for her hand.

Buy her book on Amazon 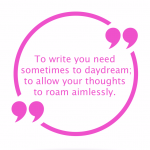 Writing Secrets: Making the intentions work for youTips for Writers 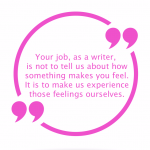 Writing Secrets: You’re the doorman, not the bouncerTips for Writers