By All About Writing
Posted May 8, 2017
In Writing Challenge
March/April writing challenge winners2017-05-082017-05-08https://allaboutwritingcourses.com/wp-content/uploads/2016/12/final_logo_small.pngAll About Writing Courseshttps://allaboutwritingcourses.com/wp-content/uploads/2017/02/frontpage-with-spine_tracy-todd-heine_brave-lotus-flower-rides-the-dragon.jpg200px200px
2

Last month, we challenged you to try your hand at memoir, by writing a seminal scene from your lives. The winners of the best two entries will receive a copy of Tracy Todd’s memoir, Brave Lotus Flower Rides the Dragon. Here are our competition winners:

We loved Penny Castle’s story of kindness found where least expected. The story is deeply evocative with a satisfying narrative arc. Well done, Penny. I hope you enjoy Tracy’s book.

Our runner-up this month is Mitzi Bunce-van Rooyen, for a humorous story, well told, about the humiliations suffered by our younger, less confident selves. You will also receive a copy of Tracy’s book.

Special mentions go to Keith Kinambuga, for his charming coming of age story and to Jennifer Peacock-Smith, for her poignant story of loss and pain.

And here are the entries:

“Miss Clee will see that you sit here until all the food is eaten.” Sister Margaret-Elizabeth reached for the door handle. Eyes down, I imagined her little finger slipping under her starched wimple. It happened whenever God’s instruction to love little children became vexatious. “This willfulness will stop.” She strode out on silent rubber-shod feet. Her knotted rope belt followed milliseconds behind her. The sound of girls not-running-in-the-corridors bloomed and then faded as the door shut.

I picked at the hem of my brown and white gingham apron. Shirley Ashbridge’s mother had sewn a giant pocket onto her apron. Shirley never had to stay behind after lunch.

“Try one bite.” A podgy hand nudged the stinking dish of pilchards towards me. I scratched at the table edge. Grime collected under my nail. Shirley claimed that their vet was James Herriot. I wished James Herriot was our vet. I bet Sister Margaret-Elizabeth wouldn’t makehim stay behind to eat pilchards.

The red, plastic framed clock ticked and a bell rang. Miss Clee looked at her watch and sighed. The tip of her too pink tongue slid across her lips.

“If you take just one bite I will finish the rest. It will be our secret.”

Coiled eels of vomit slithered in my throat as I pinched my nose and scooped a forkful of the fetid mass into my mouth. I bolted for the door and the bathroom beyond.

“Penny!” I gagged, anticipating being called back. “No running in the corridor.”

The Biology lab smells of after-break sweat, sulphur and formaldehyde.

A pale, skinny, Mrs Peters looks out over our STD 7 class.

“What’s the term for the process by which food is crushed, and ground by teeth?” she asks.

My hand shoots up, and even before she picks me, I yell enthusiastically:

As the word flies out of my mouth, I immediately wish I could suck it back in.

There’s a split second of shocked silence, and the entire class bursts into shrieks of laughter.

Mrs Peters looks at me with a bemused, quizzical expression.

“Um…Mitzi…don’t you mean mastication? What are you thinking of?”

More screams of laughter from the boffins seated around me. Of course, they would never make such a stupid mistake.

My face glows bright red. I lower my head onto the desk in an effort to hide.

What am I even doing in this class with the clever kids? I can feel their eyes on me, devouring my intellectual nakedness. Even the frogs look on in disdain from their glass prisons.

I desire with my entire being that the earth should open up, and swallow me whole.

But no such luck – it remains stubbornly shut, for the entire, excruciating lesson.

And what a lesson it is.

The Great Defeat by Keith Kinambuga

Molo’s bewildered band of brothers withdrew. They had not expected me to fight back. I was naively treading shark-infested waters but did not care. I threw a punch and it landed squarely on Molo’s imposing mallet face. He countered quickly, connected with my nose and shifted his massive weight. His narrowed marble eyes sized me up.

I bellowed another desperate war cry, “Yaaaa-ah!” and threw a kick that hit his broad shoulder. It was a move that I had learnt in toddler Karate class. We were now suddenly on the same level, two standard five kids brawling except that I was the geeky class prefect that had put the class bully’s name down as a noisemaker.

Before things got worse, the 3.55pm bell rang. There was no chance we would survive stiff canes to our buttocks if the teacher on duty caught us fighting in the playground past 4pm during evening prep. The classmates fanning our flames now pulled us back and excitedly walked both of us back to the classroom.

A member of Molo’s rowdy band threw his arm around me like we were best friends. “Your nose is bleeding.”

It was then that I knew that I had lost the fight by default. Whoever drew first blood was always the winner but then he added something else, “No one ever stands up to Molo!”

On that day, I grew a backbone.

In shorts and T-shirt with my eyes tightly shut, I could feel the grass beneath the bare skin of my legs, the warm afternoon sun on my face, a gentle breeze which wafted past now and again, and the slightest tickle of an ant which had decided that my leg might make an interesting detour to its travels. To my left was the hustle and bustle of my parent’s preparations for an early evening braai.

My heart was racing, bursting with anticipation. Daniel lay by my right as I tried desperately to do exactly what he said and when. I so wanted to please him, I was petrified I’d ruin everything. It was a simple plan, but one that he had put a great deal of thought into, was adamant we would succeed at, and there was never any doubt in my mind that Daniel was right about everything.

All we had to do was pretend we were dead. We needed to keep our eyes tightly shut (for Daniel was certain that dead people couldn’t open their eyes), stretch our arms out wide at our sides (because that is also what happens to people when they are dead), and look like we weren’t breathing.

I loved this plan for I figured, as per Daniel’s explanation, that if they thought we were dead, they would drop everything, come running over to save us, shower us with attention, and realize my worth. And if that happened, then they might love me.

Today on the blog, Richard Beynon talks the import 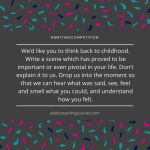 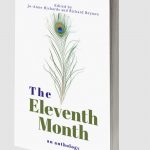