By All About Writing
Posted July 23, 2017
In Author Q&A
The Eleventh Month authors Q&A: Jane D’Abbs2017-07-232017-07-23https://allaboutwritingcourses.com/wp-content/uploads/2016/12/final_logo_small.pngAll About Writing Courseshttps://allaboutwritingcourses.com/wp-content/uploads/2017/07/eleventh-month-quote-3-social-media.png200px200px
2

On a weekend in November 2016, a number of writers gathered at Temenos, in the village of McGregor in the Western Cape. In addition to the writers at Temenos, others were tethered to the proceedings via email and the internet. We gathered the stories that were the result of the weekend in an anthology,  The Eleventh Month.

We asked the authors who jointly contributed to The Eleventh Month a number of questions about their writing. Here are responses from Jane D’abbs:

Did you ever think you could write a short story in a weekend?

I have been writing for some time and, as a way of making a stronger commitment to the writing process, started a blog with a self-imposed requirement to produce a 2500 to 3500 word story each week. The blog was called ‘Storiesthattellmystory’ and I wrote 180 000 words in less than a year. I’ve since taken the blog down and am using it as the basis of my memoir. So it wasn’t hard to have a deadline to work towards, even though I wasn’t part of that weekend in Temenos.  At the time I was writing the blog I was working four days a week so would get up very early in the mornings to write on my iPad sitting in bed, with the dogs and cat alongside me, drinking copious cups of tea. No one disturbed me and, because it is mouse quiet at 4am in the morning, it was easy to concentrate and focus.

Did you create a character with a bit of you, or did you have fun with someone completely unlike you?

My characters are real. My mother, René, Jack and Hugh are all themselves, as I am me.

Is your short story fact or fiction – or a mix of the two?

My piece is a work of creative non-fiction. It’s an area that I am interested in because I think it gives me scope to write the things I want to write about.

What was the inspiration behind your story?

The inspiration is my own eccentric, dysfunctional family coping with real-life events in an interesting period in time. As such, their lives interest me. I felt it was a legacy I could pass onto my own children and their families. I read some research a few years back where they found that a large proportion of the population are unable to name either their grandparents or great-grandparents. Nor did they know where they lived or what they did for a living. There is something rather lovely about having a thread that stretches right back into the past and I hope I can give this to my own family.  The story of the neuroscientist, James Fallon, is a wonderful example of this. When he researched his family he found out that there was a history of psychopathy in his ancestors. So he did an MRI of his own brain and found that it fitted the self-same profile of psychopathy but unlike his ancestors, his path had been very different and so positive. A recent debut novel See What I Have Done was written by an Australian author, Sarah Schmidt on the subject of his relative, Lizzie Borden. She was accused of killing both her father and stepmother. It’s a gruesome tale and I think it will be hard to stomach ever eating mutton stew again after reading this book! By comparison my family are just unconventional and odd, but nevertheless interesting.

Did you plot it out before writing or did the story evolve as you went along?

I knew what I wanted to say so it was just a matter of finding the right format and deciding what to leave in and take out. I also kept a travel diary while visiting Hugh in England as well as referring to writings, emails, letters and my mother’s own diaries, which I found after she died.

Did you have an idea before Friday afternoon?

As I said I wasn’t part of the Temenos writing group because I live in Australia. However, I had wanted to write this story for some time.

I have been in the extremely fortunate position that my mother was a bit of a squirrel so kept a diary of our time in the Congo as well as letters written to her and from her. She also wrote her own memoir shortly before dying. Unfortunately, it did not do her justice as she left it rather too late and elements of dementia had already started to present.

So I have had this wonderfully rich pool of resources from which I could access details of our everyday life and experiences while living Léopoldville during a time of tumult and change.

Have you written other short stories? Is this your genre?

Yes, quite a few. Initially I wasn’t interested in writing short stories but I have since realised that the short story narrative is an excellent way to learn how to be concise and paring. I’m hoping that this will stand me in relatively good stead now that I am in the process of revising and rewriting my own memoir.

Have you published anything?

Some months ago, I was fortunate to win the monthly All About Writing challenge with a flash-fiction piece called, ‘An Act of Retrieval‘. That led to it also being broadcast on a radio channel in South Africa.  In October 2015, I wrote a flash-fiction piece for the Australian Broadcasting Corporation, Radio National in a competition called PocketDocs. This led to participating in reading the piece on air in conjunction with an actor. It was a new experience and a lot of fun. The piece is called ‘The Psychopath and The Psychic’ and again it was based on family facts. I also wrote a short travel piece on a trip I did to India, which was published in a national newspaper, ‘The Australian’ under their travel section.  Flash-fiction is not my genre but again it teaches you to be sparing with words.

Dreams? Publish my memoir by the end of the year. Then write a book of short stories and a children’s book.

How does reading influence your writing?

Reading has had an enormous influence on my writing. I can’t imagine a world without books. For a while I worked in a bookshop and it was such a happy time in my life. To be surrounded by books and people who were interested in reading was a charmed existence. I’ve only met one person who writes extremely well, but doesn’t read. Overall I don’t think you can really write well if you don’t read.

Some of my favourite authors have included André Brink (love his concise sentences), Michael Ondaatje (love his lyrical style shaped no doubt from starting his career by writing poetry), Elena Ferrante (for her in-depth exploration of the psyche of women’s friendships), Jorge Luis Borges, Paul Coelho and Isabel Allende (for introducing me to magic realism) and so many others including A S Byatt, Margaret Drabble, Helen Gardner, Chimanmanda Ngozi Adiche, Joanna Trollope, Teju Cole, Ian McEwan, Neil Gaiman and Patrick Ness, to name but a few.

What are you currently reading?

Naturally I am reading the stories of my fellow writers in The Eleventh Month anthology. In addition, I am reading Nancy Mitford’s Love in a Cold Climate having recently finished, The Pursuit of Love. She writes very well, is amusing and her characters are as eccentric as my own family. Next on the list is Michael Chabon’s Moonglow. Not only because his writing is excellent but also because I hear that with this book he has turned creative non-fiction and memoir on its head by blending and mixing the real with the unreal and imagined. I notice he has called it a novel.

What tips do you have for other writers – either from your own experience – or a tip imparted to you that you think has made a difference to your writing?

Carry a notebook or journal with you to write down ideas and quirky bits and pieces that you might hear, see or read.

Read. Read. READ.  Write for the joy of writing whether you have an audience or not. It’s a great way to learn about who you are and I like to think it develops insight and compassion.  Give yourself small challenges. For example, I went down to the beach at the same time each night for a week and watched and photographed the sunsets. Then I wrote a description of each different sunset. Now if I want to write about a sunset I have at least seven options.  Make a pact with yourself and set goals. Keep going even when you get despondent – I think it goes with the territory of writing because it is such a solitary exercise. Read your stories aloud and/or join a writing group.  Ask people to critique your writing and learn to take their criticism and feedback in the spirit it is given. That is don’t personalise it.

The Eleventh Month is available in both hard copy and PDF formats. The cost of the hard copy is R120 plus postage.  Email us if you’d like us to post you a copy.

Click here to buy the PDF at the very special price of R25.

All profits will go to Short Story Day Africa. 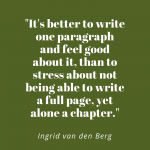 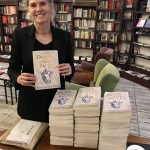 Joanne Hichens chats to us about her memoir, and on writing.Author Q&A
Loading Comments...