Monday Motivation: Why is conflict an essential ingredient of drama?

I’ve been wondering why conflict is that absolutely essential element of drama that we’ve always argued it is. We’ve said that conflict creates uncertainty, uncertainty creates suspense – will he win the trophy, or will he not? – and suspense drives our curiosity. We read on.

But perhaps this is a slightly superficial analysis. Perhaps conflict plays a much deeper role in our experience of the world, and therefore, a much more essential role in fiction. Rather than merely pricking our curiosity, perhaps conflict in fiction works on the reader at a more fundamental level.

Let’s start by reminding ourselves that fiction offers readers possibly the most accessible route into the consciousness of another. No other form of writing gives them this opportunity. Of course, the better the writing, the richer the experience of inhabiting, for a few hours, the mind of a stranger, and sharing their fears and their hopes, their dreams and their nightmares.

Every time we pick up a novel, we embark on a journey that by any measure is extremely odd. For instance, I’ve just read The Woman in the Window by A.J. Finn. The protagonist suffers from an extreme form of agoraphobia – the abnormal fear of being helpless in situations from which escape may be difficult, and results finally in the fear of open spaces.

I don’t suffer from this phobia – and indeed, I’d characterize myself as someone who doesn’t readily feel anxiety at all. By the end of the book – an excellent one, by the way, fully deserving of the high praise it’s received – I had so inhabited Anna Fox’s inner world, that I knew what it meant to be agoraphobic.

I’d lived with her through the anxiety and panic of a disastrous foray out of her house and onto the pavement – a sortie that resulted in her abject and humiliating collapse.

Right, I think we’re all together on this, so I won’t belabour it any further. I want to advance my argument by looking now at another central precept of the novel.

The novel, we’re told, tracks a character’s path from one state of being to another. That, after all, is the essence of the Hero’s Journey. Through experience, your character learns things about herself and the world that transforms her.

How does this transformation come about?

It comes about when her assumptions and her prejudices are challenged, when she is forced to abandon her comfort zone. The innocent graduate of high school assumes that people are kind and generous. Her experience as a secretary in the big city shows her that to survive in the modern world she has to be wary, she has to be suspicious, she has to be strategic in her choice of friends and partners.

A rookie in the army learns that the war which he welcomed as an opportunity to prove himself as a man, in fact reduces him as a man. The more blood he sheds, the wearier and the more depressed he becomes. He emerges from the war as a “hero” celebrated by his community – but within months tries to commit suicide, such is the burden of his experience.

Lovers who embark on an affair begin by assuming that that initial bliss is what love is all about. They learn that it’s also about accommodating differences in each other that they might once have condemned.

This process of growth, of change, can be immensely difficult. It is fraught with conflict. That, after all, is how change happens. We don’t become wary of the world because we want to. We are forced to become wary and cautious and suspicious through experiencing indifferent bosses, selfish lovers, cruel strangers. This is why conflict is so central to drama. Without it, there is no growth. Without growth, there is no journey.

And without a journey, there is no… story.

Yes, conflict certainly does create uncertainty – but it is also essential in the process by which one sloughs off the skin of one’s earlier self, and adopts the raiment of one’s new self.

And perhaps that’s why a conflict-free story is not a story at all. 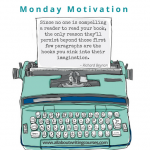