Writing Secrets: The case for showing, rather than telling

There’s been a great deal of discord about showing and telling in recent years.

It’s a truism of good writing that we should always show, rather than tell. Recently, though, there’s been a come-back case made for telling. Showing has been part of creative writing wisdom for so long, there are those who think it has passed its sell-by date.

Bernard Markovits, for example, wrote in the London Review of Books that writing programmes created a complete lack of tolerance for telling – probably because not many writers are good at telling.

Most beginning writers use explanation in a way that doesn’t necessarily hold the attention. Explanation is easier. It’s simpler to give us a paragraph which explains exactly who and what a character is than to think of ways in which to reveal this character information through the way they behave, what they say and how they see the world.

That’s a certain kind of telling, though. The writer creates an appealing narrator who expounds on something in an interesting way, so that we become equally interested in their preoccupation. In the same way, many writers can be lyrical or funny as they run us rapidly through a period of time or a character’s life.

There is certainly a place for “telling”.

As a general principle, we teach our students to avoid explanation. “Showing” characters in immersive scenes is more dramatic than simply telling us about them.

And yet, we’ve all come across books, published and presumably read, in which the writers give us pages of back story, which stops the narrative in its tracks and explains not just everything we always wanted to know, but what we could have done without, about a particular character.

If they can do so in a way which holds your attention, good for them. Or perhaps it’s just that the story is generally engaging enough that you simply put up with it.

I recently read one such book in which the writer allows herself endless latitude to give us pages and pages of explanation on nearly all her characters: their histories, motivations, psychology.

Frankly, I found my mind wandering. But perhaps more importantly, it didn’t transport me. I remained with my feet squarely planted in the real world, vaguely interested in a group of people I was being told about from a distance. I can promise that it’s not a read which will stick with me.

I think this relates back to the nature of reading, a subject I’ve been dealing with over the past few weeks. Allow readers an active role in the process, by not telling them everything, and their imaginations will be engaged. The act of reading will involve their emotions, as well as their intellect. It will stimulate their empathy, not just for those characters, but generally.

When you show, it becomes necessary for readers to fill in the blanks, and interpret actions or gestures for themselves. That’s how it works in life. No banner drops down from the sky to tell us everything we need to know about some guy we’ve just met.

Why should reading be any different? 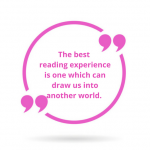 Writing Secrets: What do reading and magic carpets have in common?Jo-Anne Richard's blog, Tips for Writers 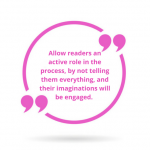 Writing Secrets: Don’t neglect the most evocative of the sensesJo-Anne Richard's blog, Tips for Writers