Writing Secrets: No need for a war or a car chase on every page

So you’re writing the first pages of your novel and want to set up the fact that Linda is as happy as she could ever hope to be with her new boyfriend Marvin.

It’s important to your story because a couple of scenes in, you want to ruin it all by having Marvin take up with Bruce.

The trouble is that those pesky All About Writing people told you that no scene exists without some form of literary conflict. So, what to do? Perhaps you nod sagely, go home and ignore our advice utterly.

After all, you don’t want to start with a scene in which Linda and Marvin are fighting. That would defeat the purpose. You want to show them cooing at each other.

If this describes your confusion, then you’re not alone. I’ve mentioned before that many people misunderstand the idea of conflict. Remember, though, that conflict is essential, not only to your grand story idea, but to every scene and every page.

But that doesn’t mean every page demands a punch-up, a war or a car chase. You can be infinitely more subtle, and still retain our interest.

It is possible to inject conflict, even if you want to show Marvin and Linda in love – without visible conflict in their relationship. They don’t even need to be vaguely tense with each other.

So how about … Marvin is struggling to get the fire going. Goose-bumps are playing up and down Linda’s arms. She doesn’t want to put her coat back on in case he takes it as a reproach, or a sign. She’s trying to keep the feeling in her fingers without rubbing them too vigorously.

Or, Linda is a little shy. Marvin has taken her out for a meal. Marvin is talking commitment and she’s desperate for a pee. She can hardly concentrate on what he’s saying. She’s looking around desperately for someone approachable enough to ask directions to the loo.

Or the dress she wore is too tight, or she fears it’s too smart, or too casual. She wishes she could invite him home afterwards, but she doesn’t want him to come face to face with her alcoholic father.

You don’t have to make people fight in order to make a scene worth reading. But they have to be facing something. Notice the conflict I’ve suggested above does more than give the scene interest. It shows us more about the characters and about their relationship.

Anything that tests a character’s mettle will show us aspects of their personality. It will help you develop your characters. 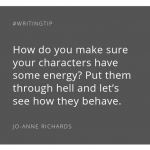 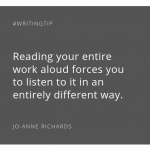 Writing Secrets: How to judge your own writingJo-Anne Richard's blog, Tips for Writers