Unveiling the winners of our February/March Writing Challenge

By Richard Beynon
Posted April 9, 2020
In Writing Challenge
Unveiling the winners of our February/March Writing Challenge2020-04-092020-04-09https://allaboutwritingcourses.com/wp-content/uploads/2016/12/final_logo_small.pngAll About Writing Courseshttps://allaboutwritingcourses.com/wp-content/uploads/2020/04/2020-banners-2-31.png200px200px
0

Winners of the February/March Writing Challenge

Write a piece of flash fiction, we said, in which your main character runs into the person they almost married five years ago but dumped because they got cold feet. They have regretted their caution ever since…

Seems to me the key to writing successfully about an awkward reunion like this one is, as is in writing generally so often the case, restraint. The temptation is to tell us precisely what the characters are feeling, to have them aware of the stupidity of that original decision, to have them condemn the wasted years since. But it’s good to resist that temptation, to be obliquely suggestive rather than to direct.

So first prize for her restraint goes to Mitzi Bunce-van Rooyen for her sly and her really very funny piece, Buyer’s Remorse. Congratulations, Mitzi! You win a literary assessment on 5000 words of writing worth R 2750 / £ 150 or a voucher to the same value to use on one of our courses or programmes.

Runners-up, in alphabetical order are:

Andrew Bailey for his One Last Look, which features a real kicker at the end.

Bindi Davies for her wonderfully authentic encounter at the vet’s.

Melissa Nortje for her deadpan ending. And

Elize Volschenk who misdirects us beautifully through the piece, allowing the last line of dialogue, surprisingly, to open a new chapter of possibility.

And of course, there are all the many others who entered, and who aren’t mentioned here, but deserve a thorough round of applause and acknowledgement in these coronadays!

Read the winning entries below, and check out the guidelines for our April/May challenge here.

His green-eyed scrutiny makes me nervous. He’s forced to repeat the question, and this time I answer him; too honestly. “Recently separated,” I say.

The left corner of Peter’s mouth tilts ever-so-slightly upwards. The suit he’s wearing is pinstriped and pressed. I glance down at my frumpy frock and notice a peanut butter smear. Great.  “And how about you?” I ask.

I’ve stalked him on social media for years, so this is purely rhetorical.  His young wife is featured in the latest Sports Illustrated. She’s wearing an itsy bitsy teenie weenie…well, you get the idea. My therapist has warned me against the evils of obsessing; but really, what does she know?

“Happily married,” he says, smiling and showing me his ring; as if I need proof.  “We met two years ago; been inseparable ever since.”

That’s a bit of a porky pie, Peter. You didn’t travel to the Bahamas with her for that photo shoot, which means you’re not altogether inseparable. So there! I say none of this out loud. It’s okay thinking crazy thoughts, but quite another thing expressing them.

His eyes settle on my baby bump, and I cradle it in an effort to hide what’s already been seen. His tanned features flicker between pity and relief.  I can’t bear to look at him anymore, so I stare aimlessly down the aisle. It’s then that I spot my friend barrelling towards us, oblivious; my incontinence pads held proudly aloft.

One Last Look by Andrew Bailey

She looked down through the foliage – he looked so happy.  His family was there, she could see the familiar faces.

He leant across and kissed his wife, the baby in her arms in an immaculate white Christening gown.  A perfect life – her perfect life, dammit!

She moved away from the hedge, turning, feeling hot tears course down her cheeks.  She was stronger, better than this!  She chastised herself and wiped the tears away with the back of her hands.

As she climbed higher back along the slope, she played the scenes over in her mind as she had done so many times before.  The romance, the excitement, the expectation.  The lump, the fear, the certainty.  A harsh new reality.  The operation.  Concerned friends, family and him. The breakup.

Arriving home, she showered.  She wiped the steam from the mirror and ran her eyes along the pink, lumpy scars.  Disfigured.  That’s all that she could see.  How could she inflict this on someone else?

He tugs on his lead, trying to get to where James is sitting at the far end of the waiting room, head down, scrolling on his phone. I haul him back towards the door, but a Rottweiler blunders in behind us, foam spraying from its jaws.

Baxter yanks me forward, crashing into a tower of prescription food. Tins clatter onto the tiled floor.

James’s head shoots up, but it’s too late. Baxter careens into him, knocking his plastic chair backwards and tipping over a rack of toys.

“Susan.” James leaps to his feet, a plastic chicken with orange hair squeaking beneath his shoe.

“What are you doing here, James? You don’t like dogs.” Baxter never did get this message. His nose is buried in James’s crotch, his tail like a helicopter blade. Traitor.

“I’ve changed.” James pushes Baxter’s head away gently with the heel of his hand. “You did us a favour, Susan.”

He points towards the closed consulting room door. “It’s not mine, exactly. Not yet, anyway. It’s Dale’s.”

“I suppose she’s beautiful.” She must be if James has accepted her dog.

“Not exactly.” His eyes crinkle. “She’s got a squashed face and really bad breath. Here they are now.”

A man in a tight powder-blue T-shirt emerges from the inner room, a bulldog snuffling at his feet.

She leans in, gently lifting a chubby baby with wet little eyes from the trolley. She cuddles him tightly.

I remember her calmness… her reassuring hugs.

She startles as she catches my stare. She glances away quickly, lowers her eyes, turning the trolley down the opposite isle.  I rush forward. “Hannah, Hannah..uhh..Hi Hannah.”

Her eyes find mine.  They are moist. She is biting her bottom lip – just like the last time we spoke. “Hello Anthony”. It’s just a whisper. The baby nuzzles his face firmly into her shoulder.  A little arm curls around her neck.

“This is Michael.” She speaks into the baby’s body, not looking at me.

“You’re looking well. How are you?”

“I meant to call…to see how you were…but I…”.  Such inadequate words.  She’s so beautiful.

“Oh…there you are, Hannah. We’ve been looking for you.”  A dark-haired man strides towards us, holding the hand of a young boy with thick curly blonde hair.  He kisses the baby on the cheek and ruffles his fine hair before extending his hand. “Hi, I’m Carl. This is my son Jake. Jake, say hello.”  Hannah looks away.

“Hello. It’s my birthday tomorrow.  I’m getting a water gun – the big bazooka one.”

I drop to my haunches. “Hello Jake. Happy birthday.  How old are you turning?”

He holds up his hand, all fingers stretched out.  “I’m turning five.”

She had never been struck by lightning, but she imagined that this was how it felt. When his eyes made contact with hers, she was sure she would die right there. She almost wished that he would just glance away with the same disgust on his face that had been there five years ago, but no. Instead he showed her every emotion he felt and she could still read him as clearly now as she could then. The slight widening of his eyes when he saw her, not expecting her to be there. The tightening of his jaw, frustration over his life being disrupted by her. Again. The way he bit his lip, wondering if he should say something or just walk away.

She broke eye contact first, looking away with an awkward grimace that was supposed to be a smile. He deserved better than her. He sure as hell deserved better than having to face the woman who broke his heart in a run-down coffee shop on the bad side of town. Looking down, fighting tears, a pair of shoes slid into her vision. 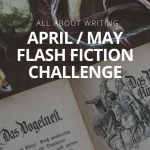