3 Tips for Mastering Point of View

Point of view is a complex subject, which we cover in depth in our Creative Writing Course. Each point of view creates a subtle and sometimes not-so-subtle difference in what you write. It can utterly change the story you are telling. We can characterise that difference in terms of distance, the distance of the reader from the character.

Here are a couple of questions we’ve been asked about point of view in the past.

There’s no easy answer to whether you should write in first person or any other literary point of view. You have to look at the effect it creates. You need to choose the point of view that best suits the effect you are hoping to achieve. Sometimes, you may need to experiment, see what works.

I started writing The Imagined Child in first person. When I reached the end of the first draft I realised I’d made a mistake. My character was lying to herself, pretending she was fine when she wasn’t. First person brings your reader right inside a character’s head. It felt wrong for that character, who lacked insight into herself. I rewrote the second draft in a closely-attached third person, which hopefully provided the sense that she was slightly distanced from herself.

We would say, the omniscient point of view is the hardest point of view to use well. It’s difficult for new writers to use it without sounding a little bland and neutral, And it is often used, especially by new writers, as an excuse for explaining. As a writer, you need to avoid explaining at all costs.

Using a more limited point of view – closer to the perspective of your character – might seem to allow you less latitude in what you are able to tell the reader. But that limitation works in your favour because it forces you to show more than you tell.  You are also able to adopt something of the voice of the character.

A more limited point of view will provides an added tool: the way your character looks at the world doesn’t just show us the thing observed, it shows us more about the character observing.

A “deep” point of view is another way of referring to a more limited point of view, closely attached to the perspective and consciousness of a character. The easiest way to achieve this is to use first person.

You can also achieve a close attachment to a character using the third person. This is subtly different from first person in that it provides a small degree of distance, although you are still allowing your reader to view the world through their eyes, ears, nose, skin and thoughts. If you find this difficult to achieve, don’t worry about the mechanics. Imagine yourself slipping inside the skin of your character and viewing the world from the inside out. Don’t move outside your character to report on them.

The effect of this is to immerse your readers in the moment and allow them to experience events along with the character. You want your reader to feel the same emotions as your character, rather than simply telling your reader what the character is feeling.

The deeper your immersion, the more closely you are attached, the more you will show your character’s emotions through their thoughts, feelings and reactions in real-time., rather than telling us what they’re feeling and thinking. For example:

“She was fearful of entering the room.”

If you move into a deeper immersion in the character, you could write:

“She paused at the door. Sound rushed at her. The bass tones vibrated through her feet. She scrubbed at her palms with a tissue, then shoved the shredded mess back in her bag.

Hopefully, the reader is experiencing that moment with her, feeling her fear along with her.

Book recommendation: A Visit from the Goon Squad by Jennifer Egan, written in every imaginative point of view.

how to be a writer, how to write a book, writing point of view

Writing Secrets: You can never be perfect – but you will get betterJo-Anne Richard's blog, Tips for Writers 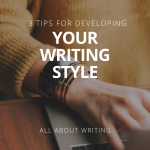