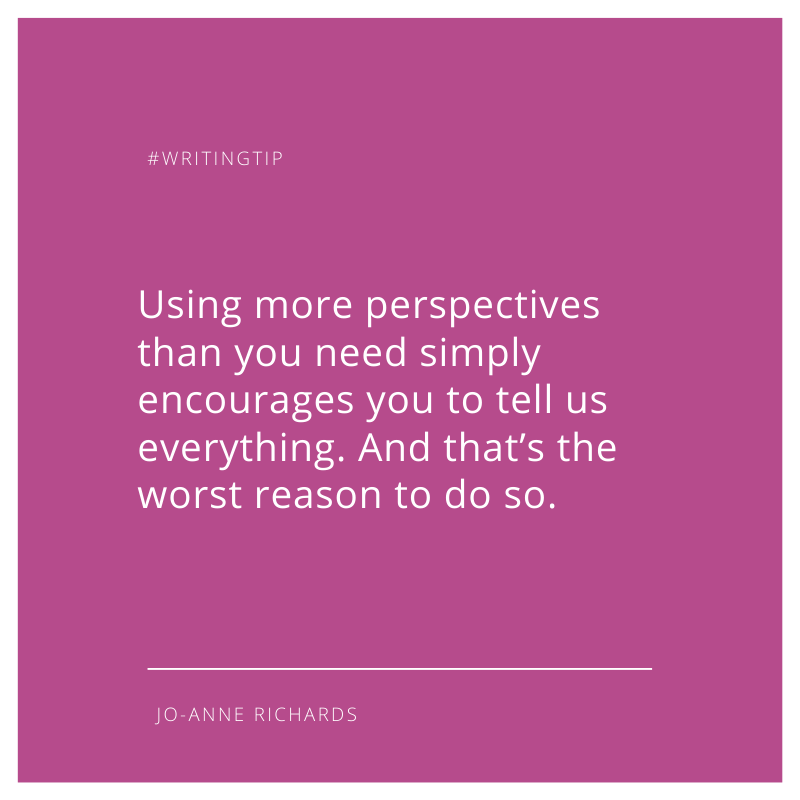 So you’ve worked out a story, and you think you’re ready to start. Only, there’s one decision you haven’t made: from whose perspective should you tell the story?

There’s often not an easy answer to this. Although sometimes there is – the writer simply hasn’t asked himself enough questions, such as: whose story is this?

As I mentioned last week, character is paramount. Simply because you have a list of events, doesn’t mean you’ve worked out a story.

Asking yourself that question might determine whose perspective you will write from. Although, not always. You might, as Fitzgerald did, choose to write Gatsby’s story from the perspective of his neighbour – and thereby shroud him forever in the mystery provided by an imperfect and unreliable view. But then, of course, it turns out not simply to be Gatsby’s story, or Daisy’s. It becomes Nick’s story. The events he witnesses affect and transform him.

Do you write from one or two or many perspectives? Well, let’s start with what you shouldn’t do. Don’t simply choose different perspectives because you don’t know how to “show” things to the reader.

In some ways, limiting your perspective means you’re forced to write better. If you take her perspective, you’ll have to show us, from the outside, how he reacts to the news she brings him (and she’ll view that reaction through her prejudices and preconceived notions, which makes it more interesting).

It’s possible to use both perspectives, of course, but not in order to tell us everything. We don’t, or even want, to know everything. Knowing less, being unsure of things, carries us forward, makes us want to read on.

So we don’t need to understand his reaction from the inside. Why would we? We’re used to the fact that objective truth is not possible.

If he says:  “Fine. It’s all fine,” and won’t elaborate further, we’ll be as intrigued as she is. She’ll come up with all sorts of possible interpretations and explanations, all of which may well be wrong.

If you use more than one perspective, then each needs their own wants and desires, their own story arc – very different from each other’s – their own voice and personality.

Say a biological father turns up out of the blue and presents himself to his former one night stand  – the scenario we considered last week.

If we see this only from her perspective, we follow her view of events. The child is too quiet. Traumatised, she thinks. Oh my god, what if the man is a paedophile? (Why did he turn up out of the blue like this, anyway, when the child is three / eight / twelve?) She might question the child too closely. “But what did you do together? What games?”

The child gives innocent answers, which can fuel her suspicions still more … It has the ingredients for a great story.

If you choose to use both perspectives, he might think he’s getting on great: after all, the child gives no trouble. He thinks he’s doing fine as a father. We lose the mystery of whether or not he’s a paedophile but, since we know he’s causing the mother great anxiety, it might make us laugh at the misunderstanding. It becomes a different kind of story.

On the other hand, there’s probably still some mystery about what’s really going on with the child. Or perhaps you intend to use the father’s perspective so skillfully that we’ll only be fooled into thinking we know him. Nobody really thinks they’re a bad person, do they? Seeing into his head won’t necessarily enlighten us. So perhaps we’re lulled into complacency by seeing his side of things – but only at certain times.

In other words, you’re not using two perspectives to show us some kind of “objective truth”, or “what’s really happening”. We might never know that. Neither do we want to.

You don’t want to show us everything, so use only as many perspectives as your story truly requires. And remember that story is dependent on character – not on the events you’ve cooked up to throw at them. So you have no need to show us every view on those events.

Using more perspectives than you need simply encourages you to tell us everything. And that’s the worst reason to do so.

how to choose a point of view, how to write a novel, writing advice