Three tips for nailing the ending of your story

Beginnings are exciting because you’re establishing the characters you’ve been developing, and, launching your great ideas. Middles are hard work because you need to keep people interested through the largest section of the book. But it’s endings that readers will take away with them.

It pays to give endings as much thought as you give to the rest of the book. Some wise man in Hollywood once said, if you haven’t spent 80% of your thinking time devoted to the end of your screenplay, you will have problems. That advice applies equally to books.

You could almost say that it’s better to write an unexceptional book with a good ending than a beautifully executed book that goes nowhere.

Endings are difficult to talk about because every finish is different. There are, however, some universal truths about endings.

Here are our top three pieces of advice:

Want to learn more about writing endings? Sign up for our virtual Creative Writing Course, kicking off 10 August 2020. On early-bird sale until 26 July. Spots limited. 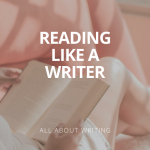