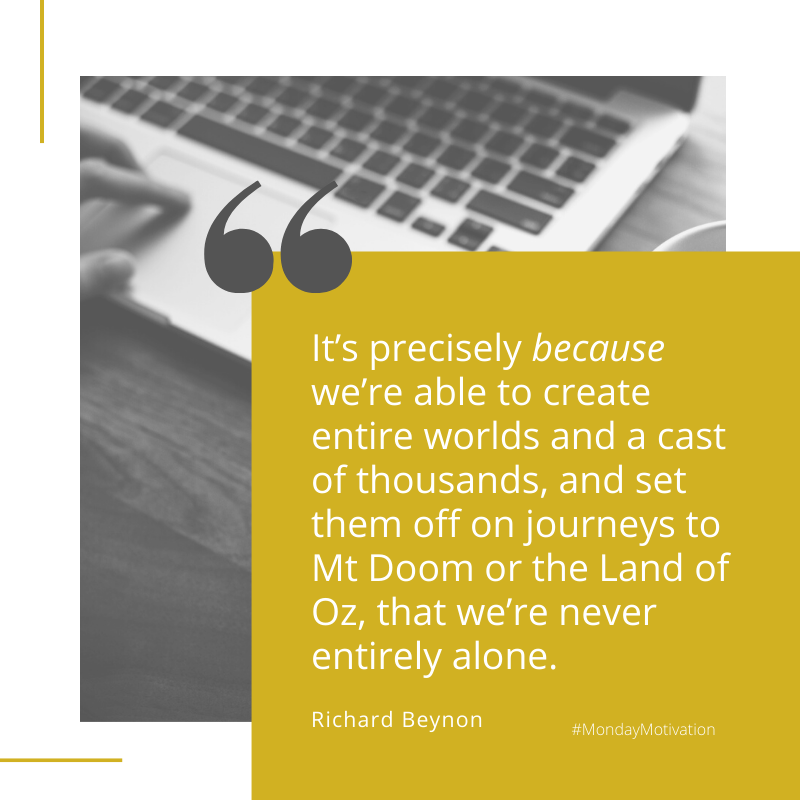 I’m about to reach a milepost in these musings on the writer’s journey. I’ll soon be posting my 365th Monday Motivation. So, because I love symmetry, and because, for that reason, I love bookends, I’ve decided to go back to my beginning and end this first cycle by trotting out those first few blogs once again, giving them a little shake where necessary, and otherwise dressing them up in a little verbal finery.

Number 1, was an introduction to the series, and doesn’t really stand alone. Nor had I stumbled on my voice. So, I’ll begin with number 2, which I called, then, The Loneliness of the Long Distance Scribbler.

Writing can be a fundamentally lonely pursuit. It would be good to know that there’s always someone who’s interested in what you’re doing and, perhaps as important, understands how difficult it can be to do it.

Most non-writers just don’t get it: the agonizing over which word to use; the conviction that there is a word just beyond that writer’s grasp that could nail what she’s trying to say; the knowledge that, however good the day’s work may have been, there’s no doubt it could have been much better…

We work in solitude (even if, in those glorious pre-covid days, we write in crowded coffee shops) and sometimes doubt that anyone’s going to read a word we write. Our words, we fear, are as grass, destined to spend no more time on earth than we do…

We might, of course, join a writers’ group, and share our joys and disappointments with others of like disposition. We might talk earnestly to our partners about the struggle we’re having finding a way forward in our story. We might (God help us all) seek professional help.

But whatever you do, you remain a writer working on a text in the lofty but deserted halls of your own imagination…

Or do you? What springs to mind is a fact I learned years ago at the Dickens bicentenary exhibition at the Museum of London. Dickens created two thousand characters, each with his own idiosyncrasies, mannerisms, and “self-hood”. Which tells me that the lofty halls of Dickens’s imagination were crowded with jostling throngs of his own creations, jabbering away, each intent on his own goals or wrapped in his own obsessions…

In other words, while Dickens might have worked alone at his desk, scribbling his thousand words a day, he was accompanied by these processions of his own devising. In fact, there must have been days when the great man was plagued by too many voices vying for his attention.

It’s precisely because we’re able to create entire worlds and a cast of thousands, and set them off on journeys to Mt Doom or the Land of Oz, that we’re never entirely alone. The trick is, of course, to commit ourselves entirely to the truths of our inner worlds. It’s as simple as that.