Writing Secrets: A character’s voice speaks of who they really are

By Jo-Anne Richards
Posted December 2, 2020
In How to write a book, Jo-Anne Richard's blog, Tips for Writers
Writing Secrets: A character’s voice speaks of who they really are2020-12-022021-11-27https://allaboutwritingcourses.com/wp-content/uploads/2016/12/final_logo_small.pngAll About Writing Courseshttps://allaboutwritingcourses.com/wp-content/uploads/2020/02/2020-banners-2-21.png200px200px
0 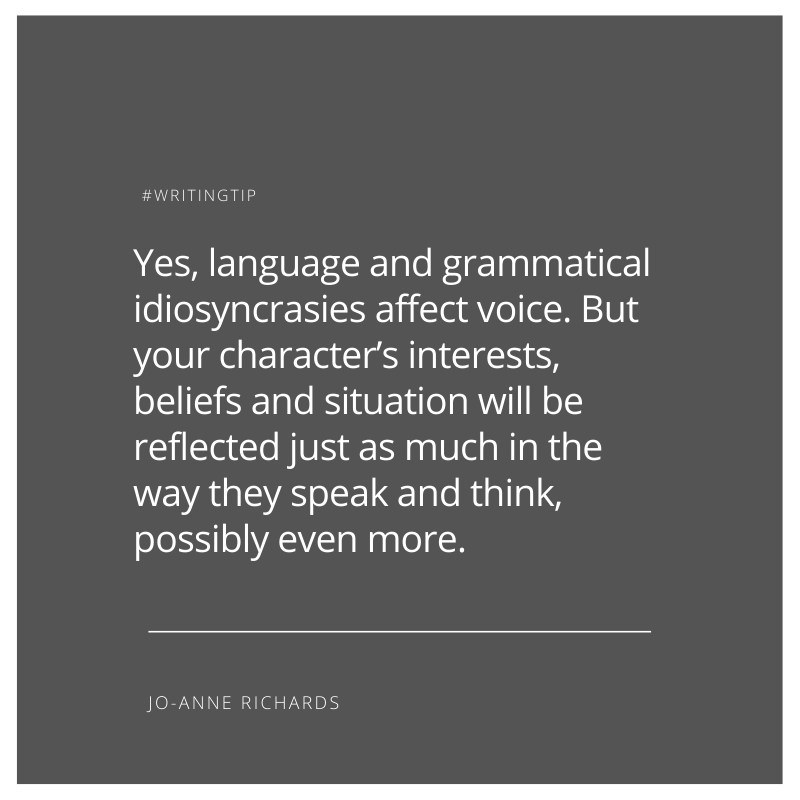 We never forget our first loves, do we? Not in life and certainly not in fiction. Last week’s blog caused in me a nostalgic sigh for the days when I sought high and low for my own Joshua Shapiro.

The appeal of Mordecai Richler’s memorable character lies to a great extent in his voice. And, as I said, a fictional character’s voice will reflect not only their facility with words, but also their place in the world.

It emerges from their background, the sum of their experiences, their triumphs and disappointments. It’s their world view, their humour and attitudes which come through both when they think and when they speak.

Having disposed of McMaster with a rash promise to read his stuff, Joshua was unaccountably apprehensive. A conditioned reflex, possibly; after all, he was still Reuben Shapiro’s boy and a cop in the house was no way to start his day…

Yes, language and grammatical idiosyncrasies affect voice. But your character’s interests, beliefs and situation will be reflected just as much in the way they speak and think, possibly even more.

Their references may be to books or art. Their metaphors might be biblical, or sporting, or perhaps have to do with teeth, if they’re a dentist, or to wood, if they happen to be a carpenter.

In the beginning, we were just about in the same boat as Adam and Eve. We had to learn the names of everything. – The Poisonwood Bible by Barbara Kingsolver.

They might speak with ease about some arcane subject, but their words will also show us something of the way they view the world:

But I’m going to finish with another passage which shows Joshua’s irreverent spirit, his view of society and the people in it:

Peabody was bankrolling and editing a little magazine, a typically snobbish and quixotic venture, with stories and poems in French, Spanish and Italian as well as English, lavishing the last of his inheritance on his favoured writers.

Writing Secrets: How to fall in love with a characterHow to write a book, Jo-Anne Richard's blog, Tips for Writers