Monday Writing Motivation: The role of handcuffs in story

By Richard Beynon
Posted February 22, 2021
In How to write a book, Monday Motivation, Richard Beynon's blog
Monday Writing Motivation: The role of handcuffs in story2021-02-222021-02-19https://allaboutwritingcourses.com/wp-content/uploads/2016/12/final_logo_small.pngAll About Writing Courseshttps://allaboutwritingcourses.com/wp-content/uploads/2020/02/2020-banners-2-16.png200px200px
0

The blank page, the even blanker screen, can act as a profoundly inhibiting factor in the life of a writer. The blank page invites you to write… whatever you like. On the face of it, that sounds fantastic. An open invitation! Wow. I can write about anything on earth – or in the universe. What freedom!

But we soon learn that unfettered freedom feels oddly… constraining. If we can write literally anything, then what shall we write specifically?

I’ll take one little example from life of the inhibiting effects of total freedom. Many writers, both experienced and inexperienced, find it easier to write when the subject matter is dictated to them. It’s for this reason that prompts on writing sites are enormously popular.

“Write a short story about a man who discovers a grave in which someone of the same name, and who was born on the same day; and which further research reveals was born in the same town; and that his parents had the same names as your hero’s; and that he, too, had pursued a career in aeronautical engineering.”

Compare the experience of responding to a prompt like that with staring at a blank screen and wondering what to write about.

It’s clear that limitations inspire creativity. (It’s also true that we’re inclined to believe someone else’s ideas are intrinsically more interesting than our own.)

But limitation is, in fact, a powerful principle of creativity. A story that spans continents, or centuries, is not only daunting to write, but frequently palls in the reading. Forgive me the generalisation, but a more constrained story, handcuffed to a few very specific locations, and with a cast not of thousands, but of just two, or three, or four characters, is much more likely to compel our attention than a sprawling saga.

Ah, you say, but what about novels like War and Peace, or its twentieth-century equivalent, Life and Fate? They were about military campaigns, entire wars, they were sagas with casts of not just thousands, but hundreds of thousands, even millions.

But think about Tolstoy’s decision to tell the story through the experiences of just a handful of characters and their interrelated families. Grossman followed precisely the same prescription in his book. He chose a large subject for his story, but applied a tight, disciplined focus on just a few characters, each of whom we got to know in-depth.

The same “rule” holds true at the more imaginative end of the creative spectrum. Science fiction and fantasy writers know this about the fantastical worlds they create: although they’re free to invent anything they like, taking liberties with even the most fundamental of physical laws if they so desire, once they’ve established their own rules, they must stick by them. There is little more disappointing than a story in which, in mid-stream, faster than light travel, which previously had been impossible, suddenly becomes possible simply because the plot requires it.

And at an even more intimate level, the strict limitations imposed by your choice of point of view, far from limiting the drama, will give it added edge and oomph. Readers will more easily be able to share the sense of peril, of anticipation, of anxiety of a character if they are not given information of which the character is not aware. The omniscient author will always be tempted to reveal all she knows (which is everything), and so release the dramatic tension created by her character’s limited grasp on events; whereas the writer who writes from inside her character, limiting herself to his thoughts, dreams and perceptions will enable readers to immerse themselves in his world.

P.S. After I’d written this, I came across a quote by T. S. Elliot that says it all: “When forced to work within a strict framework the imagination is taxed to its utmost – and will produce its richest ideas. Given total freedom, the work is likely to sprawl.”

Writing Secrets: Are you writing or procrastinating?How to write a book, Jo-Anne Richard's blog, Tips for Writers 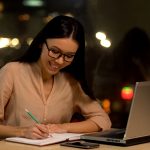 March Newsletter: Turn your writing dreams into realityAll About Writing, How to write a book, Newsletters
Loading Comments...