Monday Writing Motivation: How I fell out of love with swans

On our travels on the canals and rivers of England, we have encountered hundreds, perhaps thousands of swans. On the Thames we often found ourselves nosing our way through flotillas of the birds sailing regally on the dark waters, admiring their grace, their serenity and their parenting skills.

In Stoke-on-Trent, we watched a swan shepherd her newly hatched brood to the water for their first swim. On a flight of locks in Worcestershire in mid-winter, against the backdrop of a frozen dawn landscape, a swan beat its way heavily up the course of the locks with a whomp, whomp, whomp of its wings, leaving in our minds an unforgettable image. On the River Trent a swan passed by our narrowboat surrounded by a cluster of thirteen cygnets, apparently undaunted by the prospect of raising a brood the size, almost, of a team of rugby players.

Swans are in England nominally the property of the queen and two of the ancient livery companies of the City of London. Every summer three skiffloads of “swan uppers” move in stately procession up the Thames counting the population of swans, ringing new additions to the flock and checking generally on their health. We’ve watched the swan uppers, dressed in traditional kit, at work.

On the lake on which our houseboat is moored we’ve got to know the two resident swans. They make the rounds each day, visiting narrowboats and houseboats to politely request a handout. We oblige. Last year we bought a twenty-kilogram bag of swan food – pellets designed to meet the nutritional needs of the birds – and dispensed handfuls of these whenever “our” swans appear at our door. If we don’t immediately respond, they knock impatiently at the floor-to-ceiling window that overlooks the water.

In our first year on the lake, the pair failed to produce any progeny. In the second, the female laid seven eggs. A couple were predated either by opportunistic crows or by an otter who scouts the area for eggs left unguarded by any one of the many waterbird species. Several others proved unviable and didn’t hatch. Eventually two eggs did hatch, but after just one maiden voyage, one of those chicks disappeared. We conjectured that one of the large pike that cruise the lake had snatched it from below.

But the survivor flourished, and by autumn had grown into a fine specimen, still in its pearly adolescent plumage, but independent and, of course, like all of its kind, quite, quite beautiful. He disappeared late in the year. We imagined that he’d struck out on his own as young adults do everywhere.

This year, our pair proudly produced nine chicks. The convoy cruises about the lake guarded jealously by both parents, one in the van, the other in the rear. The adults see off any other birds that they judge threaten their offspring. When we’re on our kayak, we take care never to paddle between the parents and their cygnets in case the former take umbrage.

All of this is demonstration of the fact that we have, in common with millions of others, enjoyed something of a love affair with our swans, observing their behaviour, admiring their quirks, loving the sound as they whoosh past on whistling wings.

And then two weeks ago a neighbour on our lake confided that he hated swans. He made this declaration with such venom that, shocked, we asked him why.

“They’re greedy, cruel and vicious,” he said. “The cob killed his son last year. Probably imagined that his mother had been having it off with some passing itinerant and that it wasn’t his boy at all.” Our neighbour had witnessed the fight that led to the death of the half-grown swan.

We hadn’t realised that had been the fate of the single offspring we’d grown to love so much last year.

And it’s true that swans attack without mercy any birds that irritate or annoy them. Our big cob has taken a particular dislike to one of the Canada geese on the lake, and hounds him continually, following him interminably and ultimately forcing him to fly to safety in the lake that adjoins ours.

I’ve started noticing that the adults snatch up the pellets we scatter on the water’s surface before their chicks have a chance to feed.

So now, when I watch the cob sailing down the central channel of our lake, serene as the rising sun, his wings curled in exquisite symmetry above his back, I can’t help reflecting that not only is he beautiful – he is also greedy, cruel, vicious and guilty of filicide.

What am I to make of my exploded assumptions? Well, I suppose it’s an old lesson that we have to learn repeatedly, and perhaps we never do entirely absorb: there’s no such thing as a hero without feet of clay. The things, the people, the institutions we admire for their pure adherence to some shining ideal are, in the end, flawed.

We can love our swans and our role models, with the knowledge that inevitably they will disappoint us. But then, when the gloss has faded, we must find it possible, still, despite everything, to restore our belief in those aspects of our idols that have earned our respect and, yes, our love.

So I might have fallen out of love with our swans – and yet, somehow, the love affair persists. 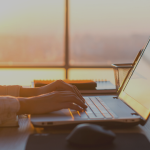