Santa Maria del Rosario, on the Giudecca canal in Venice, is noted chiefly for its classical façade – enormous Corinthian pilasters support a heavy triangular pediment. It is an imposing presence on the shore of the canal, and must, at the time of its erection, have impressed both local Venetians and foreign visitors.

It was built on soil within metres of the shoreline. In order to support that daunting façade, the architect realized he would have to underpin the foundations of the church. The technology for doing so had been centuries in development.

First, bring in timber from the forests of  Slovenia, Croatia and Montenegro. Then shape each trunk with adze and bowsaw. Each should be four metres or so in length, sharpened at one end, and solid through and through. Then hammer each of these into the mud and soil on which you intend to build. Upon this forest of stakes, erect a wooden platform – and upon that, build your particular vision of heaven.

Despite its extravagance, the façade of Santa Maria del Rosario, sometimes called I Gesuati, was a relatively modest undertaking. It required just 270 pilings to secure its foundation.

Much more ambitious was the church of Santa Maria della Salute, on the inner curve of Dorsodura, at the entrance to the Grand Canal. Records kept at the time of its construction, just after a devastating plague had carried off a sizeable percentage of the city’s residents in the early seventeenth century, show that over a million foundation stakes were driven into the mud and water.

When Venetians built their city upon the archipelago of islands dotting their lagoon, they didn’t have a master plan. They worked one building at a time, skirting the natural tidal channels, driving in their wooden stakes on which to build their churches and their palazzos.

They were, essentially, opportunists: they took advantage of the natural contours of the islands. They consolidated their fondamente where it was possible – paying constant respect to the forces of the sea and the tides. And so, over the centuries, they built a jewel on the Adriatic so lustrous that it has beguiled artists, writers and merchants for a thousand years.

This past week, I tried in a small way* to help a number of writers navigate their way through the forest of options every writer encounters as she shapes the work she’s engaged on. Some of these had devoted many hundreds of hours, and many thousands of words, to the task of realizing on paper or the screen the image and the dream that drive their endeavours.

Some were struggling with the idea. Would it work, were these characters believable, was this story possible? Others had the story firmly fixed in their minds; their struggle was to tell it with verve and panache.

And the lesson that I kept learning and re-learning was that we all need to be opportunists, ready to take advantage of this imagined twist in the story, or that quirk of a character. We have to be ready to abandon the ideas that don’t yield the drama we’re after. We have to keep a wary eye constantly on the shores of what’s possible, and shore our stories up against the tides that threaten to undermine the credibility of our stories.

And over the course of, not centuries, but months, we’re each of us capable of creating stories that will assert themselves in the imaginations of our readers with all the four-square solidity and confidence of a Santa Mario del Rosario.

*  Jo-Anne and I have been working with ten writers on our annual writing retreat in Venice. Drop us a line if you want to be included in the “interested list” for the 2017 retreat. 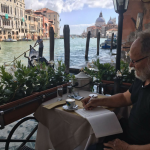 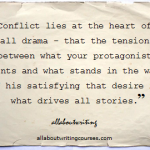 Monday Motivation: A choice between what’s bad and what’s terribleMonday Motivation, The secrets behind the practice of good writing, Tips for Writers
Loading Comments...