You’ve been writing now for some years. As your skills have improved, so your writing has become more fluid. When you sit down at the computer these days, the words spring almost unbidden to the screen. That last little story you wrote was actually quite… thrilling!

You feel that you’ve created a certain arena of competence within which you’re in control. You’ve mastered point of view, you’re capable of whipping up suspense at a moment’s notice, your dialogue is fluent and convincing.

It’s time, in short, to shake things up a little.

Take heed of a piece of advice that Vincent van Gogh gave his brother, Theo, in an impassioned letter he wrote on October 2, 1884.

“If one wants to be active,” van Gogh wrote, “one mustn’t be afraid to do something wrong sometimes, not afraid to lapse into some mistakes. To be good — many people think that they’ll achieve it by doing no harm — and that’s a lie… That leads to stagnation, to mediocrity.”

He was writing about painting, naturally, so his concern was the challenge of the blank canvas.

It’s very easy indeed to fall into patterns that we’ve already traced. We are, after all, most at ease in our comfort zone. But it’s also worth reminding ourselves that it’s only by exploring new territories beyond our borders that we extend ourselves.

How might I challenge myself? I could take a lesson from Stephen King who continually shocks us by the sheer outrageousness of his plot points. How does a demented fan prevent the author she’s taken captive from escaping? Does she lock him in a room? Bind him to a bed? Use drugs to incapacitate, or threats to intimidate him? No. She hacks off his right foot!

So I could constantly challenge myself to explore a wider range of plot options than I have in the past.

Or I could, alternatively, dig deeper in my writing. I could plumb the psychology of a character more intensively, diving deeper into his motivations, examining not just the obvious reasons for a decision he makes, but for the less obvious, more hidden triggers. I could look for more ambiguities. I could seek out more of those subtle intersections of desire and denial.

I could, like the writers of Homeland and The Americans, seek to maintain the tension between the mask and the reality, between the lie and the truth, for longer than I’d ever thought possible.

I’d look for complexity rather than easy resolution.

In every scene. In my story as a whole.

You fall down. You get up. You struggle on.

Van Gogh’s experience was a constant struggle to portray the world freshly. He never was satisfied with doing again what he’d already got right. He always challenged himself to do fresh things in a fresh way.

Whether it’s a blank canvas, or a blank screen, regard it as a challenge to extend what you already do well just a little further than is comfortable. After all, the alternatives are stark: innovate – or stagnate. 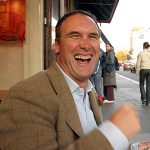