Many people tell us that, when they first come to our Creative Writing Course, we ruin reading for them.

I usually say they should be so lucky. They’re learning to read like writers and, after a brief period of disappointment, they’ll learn to take a different kind of enjoyment from it. I refuse to feel guilty or let them feel hard done by.

“Read like mad. But try to do it analytically – which can be hard, because the better and more compelling a novel is, the less conscious you will be of its devices. It’s worth trying to figure those devices out, however: they might come in useful in your own work.

“I find watching films also instructive. Nearly every modern Hollywood blockbuster is hopelessly long and baggy. Trying to visualise the much better films they would have been with a few radical cuts is a great exercise in the art of story-telling.”

Next time you read a book, look closely at the scenes and the literary conflict in each. Take note of the point of view, and how well it works. Notice the effect the characters have on you, and why. Then see whether the writer has “shown” what needs to be put across or whether there are patches of explanation which the book would be much better without. 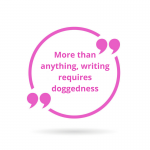 Writing Secrets: Pros and cons of the fast first draftTips for Writers 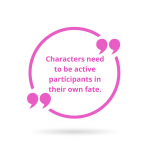 Writing Secrets: Your character can’t be a wussTips for Writers
Loading Comments...