Writing Secrets: The enemy within the subordinate clause

By Jo-Anne Richards
Posted April 12, 2017
In Tips for Writers
Writing Secrets: The enemy within the subordinate clause2017-04-122017-04-12https://allaboutwritingcourses.com/wp-content/uploads/2016/12/final_logo_small.pngAll About Writing Courseshttps://allaboutwritingcourses.com/wp-content/uploads/2017/04/writing-secrets-quote-122f04.png200px200px
1

I was recently accused of being the enemy of subordinate clauses.

I’d like to make this clear: I don’t hate complex sentences, certainly not as a matter of principle. But when you’re mentoring a number of manuscripts, you do begin to recognise certain common issues.

One of these, I would argue, is the lack of consideration given to the simple sentence. Perhaps people feel it’s too humble a construction. They need to show their mastery over the more complex structures.

When every sentence has two parts, it develops a monotonous rhythm: She reached for her phone as she headed for the door. She stepped from the house while she called an Uber…

Vary your sentence structure and your writing will appear more surprising and vibrant. It won’t put us to sleep.

Another reason people reach automatically for the subordinate clause, particularly the “as” construction, is that they want to show that a character is doing two things at the same time. For example, “She reached into her bag as the man behind her in the queue edged forward.” Or: “She reached for her tissue as her nose began to itch.”

I’m not sure I gave this construction a thought before we began our mentoring programme. But now I’m sensitised. Spot several “as” sentences on the same page, or even in the same paragraph, and they will drive you mad.

There’s nothing wrong with the construction per se, but its repetition quickly becomes an irritant. What’s wrong with a full stop? “She reached into her bag. The man behind her in the queue edged forward.” We understand that those actions are simultaneous, or just about.

I also believe that a subordinate clause can rob you of drama in certain circumstances: She pulled John behind the couch as the bullets struck Mark full in the chest.

We tend to lose the dramatic effect of Mark’s death. It comes as a bit of an afterthought, tagged on the end of the sentence. And besides, the leisurely pace created by the long, flowing sentence is at odds with the shock of the events.

Why not simply write: The bullets struck Mark full in the chest. She dragged John down behind the couch.

The staccato pace helps your reader experience the shock along with your protagonist. Should you wish to vary the pace a bit, you could also write: The bullets struck Mark full in the chest. She reached for John’s arm and dragged him down behind the couch.

The second is a two-part sentence, but we haven’t lost the drama of the bullets hitting Mark.

Sentences are your tools. They can help you express the drama of your story. Don’t let habit rule the way you use them. 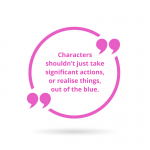 Writing Secrets: We all need a promptTips for Writers 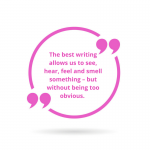 Writing Secrets: Don’t be too obviousTips for Writers