I had a chat with a television production designer recently. This is the person who’s responsible for the look of a production, which includes the set design, and the dressing of those sets. She was preoccupied with a problem she’s currently facing: designing and dressing the sets of a new television comedy series with a woefully inadequate budget.

Seeking to distract her from her crisis, I asked her to tell me what she had to bear in mind when designing the sets for a production.

“The first and most important consideration,” she said, “is the characters. Because you’re building sets for characters, and those sets have to reflect them, their values and their personalities.”

These ideas are, of course, of intense interest to writers, whether they’re composing a screenplay or fiction intended for publication. The context within which your characters operate and interact should, in the same way, reflect their values and their personalities. True, we don’t actually see the bedroom in which your protagonist’s husband demonstrates his disdain for his earnest pledges of fidelity, but a few choice details could add a layer of irony to your scene.

We don’t see the underground gallery in which the villain has assembled a vast collection of stolen art, but a mention of some of the Picassos and Kentridges adorning its walls will be eloquent testimony to his felonious nature.

Context is more important than many novice writers imagine. Passionate conversations that take place in a kind of dramatic limbo help create what I like to call “half-cooked” scenes. The context helps to complete them.

And then my interlocutor said something else that I want to retail here:

“Considerations of space are very important when you’re designing a set. You want to make it possible for your actors to move meaningfully through the sets you design for them.”

Characters in a story written for the page need room to move just as much as actors on stage, or in a set, do. Their movements need, as my designer friend said, to be meaningful.  Choosing to move gives them agency; it animates them; within the context of a scene, it enables them to show urgency or helplessness, mastery or misery.

And remember that a character who remains immobile during the course of a conversation might as well be speaking from a podium. Have your protagonist, who’s just been told that the job she lusted after has been given to a competitor, stand up, appalled, stride to the window; have her move to the drinks cabinet and with shaking hands pour herself a double Hennessy.

Action – movement in space – can be just as eloquent as any speech.

So when you’re engaged with characters, look through their eyes at the rooms and the landscapes they move through, and capture those details of their journeys (whether to the Galapagos or the drinks cabinet) that will help you drive your story forward. 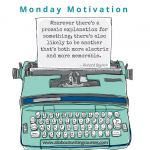 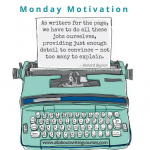