The art of writing great scenes

The building blocks of drama

We all recognize the scenario. We’ve got the story – or at least the beginning and the end – in our heads. We know our characters. But now we have to start, to commit ourselves to the page, to make marks on the screen.

And suddenly that big picture we’d envisaged – the adventure, or the romance, or the family drama – turns to ashes in our minds.

How do we capture our vision in words?

How do we turn the feelings that we’re full of into drama? How do we give these characters that we’ve lived with for the past months, life?

The answer is a modest one. Not always simple, I hasten to add. But modest.

We write a scene.

So what exactly are scenes?

Scenes are bite-sized chunks of drama. They are, in fact, the smallest dramatic unit – a brick in an edifice that could be as large as a cathedral, or as small as a garden shed.

Scenes, unlike the big picture can be held in your head. They can be mulled over while you’re doing your obligatory 40 lengths of your pool every morning; or while you’re walking the dog; or poaching eggs; or…

It doesn’t take long to write a 500-word scene.

So here’s the action point. You’ve got the heady perfume of your novel (or your short story, or your memoir) in your nostrils – now write down outlines of its first five scenes. Just two or three lines per scene that highlight the dramatic point the scene will make.

Then write the first one.

Of course, it’s still not as easy as I’ve suggested. You can get lost in even a 500 word scene. It’s possible – especially as your forge forward – to forget what your destination is, or the need to structure each scene, or any number of the other features of the most memorable scenes.

Scenes, are the basic dramatic units of any narrative.

The great advantage of scenes is that they’re not intimidating. They can be tackled (usually) in a single session of writing. They don’t challenge our capacity to hold all the elements of our story in our heads at once. And if they don’t work out entirely as we’d hoped, we can always tweak them – or throw them out entirely and start again with not much lost and everything to gain.

What would I say is the most difficult thing to achieve in scenes? Well, almost certainly, a scene that we’ve been prepared for – for which there is set-up­ – will be much more effective than one for which we’ve not done the groundwork.

So how do you prepare the ground for a scene?

Give us a little anticipatory frisson, enough to create a line of tension that we can exploit going forward.

As you forge through your story, you can set up a whole series of foreshadowing hints – set-ups, if you like – which you’ll exploit in future scenes.

That man in the distinctive beanie that bumped into your character in the park, and then, muttering indistinctly, hurried away without apology? Well, he’ll occur again, and your reader will recognize him (which is why you had him wear that Fair Isle beanie). In fact, they’ll be waiting for him to turn up again, they’ll be anticipating his return.

And the scene in which he does return – with a shiv in his hand and a murderous gleam in his eye – will thrum with tension and drama. You’ve paid your dues – you’ve set up the scene: the pay-off delivers drama in trumps.

So that’s a recipe for compelling scenes: give your readers something to anticipate, and they’ll engage fully with your character.

Our Focus on Scenes Coaching Programme, is totally devoted to how to build effective and dramatic scenes. We believe that it’s one of the most exciting programmes we’ve devised.

We reckoned that everyone would benefit enormously from a programme that gave them thorough exposure to all aspects of the art of writing great scenes.

We looked to achieve the right balance of theory (not too much) and practice (as much as can be fitted into a busy day). But the key, we felt, was as much feedback as possible.

Each one of your twelve assignments will receive our personal and detailed attention with feedback posted within 24 hours (usually) of you submitting your writing.

We think that you’ll find this a lovely little programme. Among other things, we bet it’ll invigorate those of you whose writing practice has grown a little mildewed. It’ll remind us all of the basic skills involved in writing scenes. Most importantly, we’ll guarantee that what you learn on the programme will make an immediate and marked difference to your writing.

We tackle ten different issues involved in writing compelling scenes. Here they are: 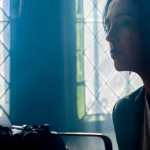