Here’s another lesson from No Country for Old Men… When last we spoke (!) I described Lewellyn Moss’s flight from the implacable hand of Fate, Anton Chigurh. He eventually shakes off his pursuer by getting rid of the transponder that’s been leaving a bright electronic trail behind him.

But Fate is not so easily thwarted, and as Moss runs faster and faster to evade Chigurh, so we realize that there is no escape. He ends up in El Paso, waiting for his wife to join him, and exchanges a few remarks with a come-hither young woman sunning herself beside the hotel pool.

Then we cut away to the sheriff, played with his usual laconic panache by Tommy Lee Jones, who’s attracted by the sound of machine gun fire, and hot-foots it to the site of yet another massacre. (The story is littered with massacres.) We see a bloody body floating in that hotel pool and hear hysterical weeping off-screen.

And then (spoiler alert), the Sheriff meets Lewellyn Moss’s wife, the sweetest, most innocent figure in cinematic history. His expression is one of the deepest existential regret. She bursts into tears and we realize that the man we’ve been backing, the character we thought was the protagonist, the man we’ve identified with and empathized with, the man we’ve been cheering, Lewellyn Moss, is dead. His was the body floating in the pool.

This is the most wonderful of all literary devices, employed here by master film-makers at the height of their powers.

It all comes down to what we have always suggested is the most powerful tool in your armoury: restraint.

Less is almost always more. Lewellyn Moss dies off screen. He dies while we’re not watching. And his death is announced not in capitals, or at high volume, but quietly. In fact, we have to deduce his passing. And that makes it all the more poignant. Here was a man who was convinced he could outwit Chigurh, the relentless Mexican hitman. And such was his determination and sheer grit, that we believed him.

So both Cormac McCarthy, the magisterial author of the novel, and then the Coen brothers, sly and clever masters of film, misled us into believing that the hero would outwit his opponent. This deceit resulted in a dramatic surprise that has few equals. And how was it achieved?

By leaving stuff out. By not playing the obvious tropes. By showing us the smoke, and leaving us to infer the fire.

Try it in your own writing. It won’t come easy, because writing around a key dramatic development is more difficult than writing about it directly. 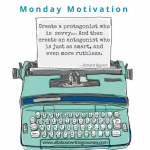 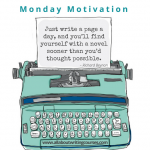