Writing Secrets: Fool yourself with files

By Jo-Anne Richards
Posted February 13, 2019
In All About Writing, Jo-Anne Richard's blog, Tips for Writers
Writing Secrets: Fool yourself with files2019-02-132019-02-13https://allaboutwritingcourses.com/wp-content/uploads/2016/12/final_logo_small.pngAll About Writing Courseshttps://allaboutwritingcourses.com/wp-content/uploads/2019/02/writing-secrets-feb-mar-1-1.png200px200px
0

I’m a great one for fooling myself, because so much about writing can make you sad.

Saying goodbye to a great idea because it doesn’t carry your current story forward, or fit the personality of your character, can send you into an intense meditation on the work of Kubler-Ross. And self-pity is such an unattractive emotion. It’s not romantic at all.

I spoke last week about the “lost ideas” file. It’s the receptacle for all the ideas which come to you during the writing of a book, but which don’t carry the current story forward. They don’t fit the personalities of the characters you’ve devised.

The “lost ideas” file is like the giant waiting room of ideas. They’ll sit there with their hands folded waiting for you to come back and choose one of them at a later stage.

The truth is, of course, you may come back later, all excited by the thought of this entire room filled with grand ideas – only to find they weren’t as attractive as you initially thought.

Many of those lost ideas will spend their lives in the great cosmic waiting room … but that’s the way of ideas. They’re plentiful. We can kill a few off without agonising about whether denial comes before anger, or the other way round.

Don’t necessarily reject them out of hand, though. An unattractive idea (or two) can, in the fertile breeding ground of a good brainstorm, potentially spawn a much prettier idea. Bad ideas are great for brainstorming – I’ve seen it happen.

I’ll confess that I also find it intensely sad to ditch a piece of description I’m fond of. Detail in a story has a job to do. It should give us the barest brush strokes, leaving space for the reader to fill in the blank spaces.

Too much? Banish it. Transport it to the “lost details and images” file. It can just about kill you to do it. It’s a vivid and evocative description, but it can’t stay where it is.

Pop it in the “lost details” folder and fool yourself you’ll use it on another day.

Detail and metaphor might also require banishment if it doesn’t fit the character. If your protagonist is a sixteen-year-old, through whose perspective we are seeing the world, he may be impressed and intimidated by those older boys slouching into the room, but he’s unlikely to think “they smelt of defiance”.

It’s the advice I gave someone in a recent writing class, and her heart cracked and tinkled before my eyes. It’s writerly. It’s pretty. It allows us to visualise those boys. Their teacher might think, “they smelt of defiance”, but that teenager? It just doesn’t fit his voice and view of the world. It doesn’t show us any more about him.

There are those who would say: Murder the pesky darling. But it takes a certain kind of person to be that cruel. I say rather: Banish it. Send it off to the giant waiting room for descriptive passages which will likely never be used again.

Read Richard’s latest blog: ‘Monday Motivation: Should books we disapprove of be burned, banned or banished?‘ 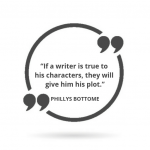 Writing Secrets: Characters who hijack the storyAll About Writing 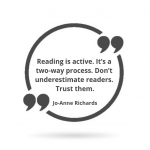