Writing Secrets: Why you shouldn’t be using dialogue tags

One of our mentoring participants had a thorny problem with speech tags the other day – which we were able to solve with examples from the work of another.

A small group of characters were discussing a mysterious problem. There were more than two of them so, to avoid confusion, our writer felt he had to resort to telling us who said what.

As a result, his text was littered with “he said” or “she said”. Everywhere we turned, there was a new tag, until all we could focus on was another “said”, ”replied” and “added”. So much so, that it detracted from the content of their conversation, which was crucial to his story.

A proliferation of speech tags may seem like a small problem, but it has an impact on the reader. It can work on our nerves, and the only way you want to work on our nerves is through your story. You want to make our hearts beat faster, not close our ears against an annoyance which jars like fingernails on a blackboard.

Because that’s what small inelegancies do. They can irritate us, increasingly, until we can no longer concentrate on the story. One or two we slide over, hardly notice, but too many will take us out of the moment. Instead of allowing us to become completely immersed, they remind us that we’re on the outside, being told of them.

“Yes, but …” he said when we discussed the problem. “…how do I solve this without confusion? There are only so many times a character can shrug or nod. Or take another sip of coffee.

It just so happened that I was reading the completed manuscript of another participant at the time, and this was an aspect of her work which had particularly impressed me. I was able to use examples from her work to offer him an alternative way of dealing with conversations.

She was particularly inventive in providing actions for her characters, while they conducted their important conversations. As an added bonus, these actions were not random, but showed us more about them as characters and the way they lived.

It’s something we always advise our creative writing students. Allow your characters to do something while chatting. You don’t want their conversation to consist of two talking heads in a vacuum. We want to see them in their environment, doing whatever it is they normally do.

Besides providing us with a fuller context, which eases our absorption into the scene, it also helps avoid those speech tags. If someone does something just before or after he speaks, we know who is speaking. You can do away with the tag.

But … let it be something a little more creative than sipping coffee otherwise, as our participant said, you end up with the same problem. Endless characters taking endless sips …aargh, I can hear that blackboard screech.

Our other participant was inventive: two characters were transporting an appliance to an aunt and setting it up in her kitchen, while all three of them discussed … parentage. An absent father. Nothing at all to do with the appliance, and yet, those actions gave the conversation a sense of reality it would not otherwise have had. It embedded the characters in their context and showed us a great deal more about them, without our even being aware of it.

It also meant that she needed hardly any speech tags.

So be a little more imaginative. Instead of setting that crucial conversation in a kitchen, where someone is about to … dare I say it … pour a cup of coffee, think again. Perhaps they’re trying on clothes together, or planting a tree, or picking vegetables, taking the dog for a walk, or taking an engine apart.

Whatever it is, allow it to show us more about the kind of characters they are, while it roots us in the moment. And its elegant by-product? There’s little need for speech tags. 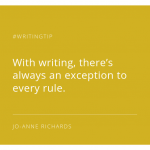 Writing Secrets: Drama leaks away in retrospect – in life and storyJo-Anne Richard's blog, Tips for Writers 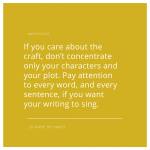