Writing Secrets: Drama leaks away in retrospect – in life and story

We come upon our character lying in bed (or in a restorative bath, for that matter). She sighs, overcome by the dramatic events which have lately overtaken her.

Events which she then remembers.

I’m not sure exactly why we’re tempted by this order of events, but I’ve been finding it a lot lately in our mentoring submissions and assignments. The effect first, followed by the cause – remembered.

It’s never a good idea. Unless … (Yes, with writing, there’s always an exception) … unless, perhaps, you want to hold us in suspense. But let’s first deal with why it’s not generally a great idea.

Essentially, it’s a passive scene. Our hero is lying (or sitting) about, with nothing to do but think. She sighs a lot, or perhaps fights tears, so we know something bad happened. We’re tipped off.

Then she goes through it all in her mind. In retrospect. Because it’s a memory, it’s not dealt with in quite the same step-by-step detail as it would in the moment. And we know she’s okay. Whatever it was she faced – whether it was physical or emotional jeopardy – she got through it.

We respond more viscerally to scenes which throw us into the moment, rather than those which gently lead us there by way of a meandering path. A path which requires us first to wade through passive sighs and heartache before we even reach the action.

It loses you drama. Whatever you’re writing, whether it’s character or plot-driven, whether your action consists of emotional turmoil, a spiritual battle, an intellectual debate … or a life and death struggle … recounting it in retrospect will generally bleed it dry.

Throw us rather into the moment itself. Show us her response to it in a later scene.

And here comes the exception. Perhaps you want to hold us in suspense about those dramatic events. So we come upon our protagonist … hopefully, even in our exceptional example, not prone. Let’s have her doing something a little more active than lying in the bath. But nonetheless, she’s devastated. Her life has changed. She’s been altered by events which have overtaken her.

The difference is that you don’t enlighten us. We continue to be fed small references to The Event, until we are absolutely desperate to know. Only then will you take us back to it, but in a way that allows us to live through it minute by minute. 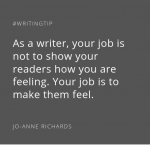 Writing Secrets: Who cares if you feel it – just make sure we doJo-Anne Richard's blog, Tips for Writers 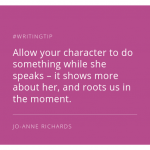