Writing Secrets: Write with more flow – use a character

New writers often write too formally – as we were taught to write at school. Remember those ghastly business letters? They certainly couldn’t be accused of demonstrating any kind of writer’s voice.

It goes further, though, than simply telling writers to relax into informality. It touches, as most things do in the end, on my favourite subject: point of view.

I’ve long told writers who are new to the game that attaching yourself to a character, whether you’re using “I” or “he” or “she”, forces you to write better. If you, the writer, place yourself at the forefront in telling the story, there’s too much temptation to explain things – and explanation is anathema to good writing.

If we’re seeing, hearing, smelling, tasting and feeling the world through the perspective of a character, you simply can’t explain – because that’s not what they would be “thinking” in the moment. Every detail also develops a greater meaning. The way they see the world tells us more about them.

Fluency is an added gain. The words take on some of the character of the perspective character, which means you also can’t write in “business letter” style.

I’m not the only writer who believes this and I recently came across this interview with Elmore Leonard, which I thought worth sharing. He’s known for his realistic voice and the easy flow of his writing.

“First of all,” he said, “I’m always writing from a point of view … Because then the narrative will take on somewhat the sound of the person who is seeing the scene.

Here’s a passage from Leonard’s Out of Sight, which shows what he means:

Karen phoned her dad late Monday afternoon from her room in the Westin. He asked about her flight, hoping, he said, Northwest wasn’t still serving that scrambled egg sandwich with the banana and yogurt, and the bagel if you got the sandwich down and were still hungry. A cold bagel, for Christ sake.

Here are a couple of lines I found in a writing exercise recently. The protagonist is a small boy:

He found a National Geographic and, after turning around to see if anyone was present who might reprimand him, he paged through it.

The thing is, reading those lines, we don’t feel immersed in the life and experience of the boy – the language is too formal.

It could be improved just by slipping inside his skin:

He liked the one with the chimp on the cover. He looked over his shoulder. No-one was watching him. He licked his finger and started to page.

That evening, while his daughter is preparing supper, Gramps enters and informs her that he needs to talk to her alone.

Climb inside their world, though. Feel what it’s like to be Marty (which is how Gramps thinks of himself) and, instead of simply telling us what’s going on in fairly formal language, allow him to lead us into their world.

The kitchen feels warm, full of steam. Janey’s peeling a potato and singing along to I will survive.

“Glad I caught you alone, love.” He speaks louder than he meant, but then it isn’t easy to be heard above her duet with Gloria Gaynor. She looks up and drops the peeler. Damn, he can never control his expression.

He hates to add to her burdens. Perhaps he should just keep his trap shut for once. But no, he can’t. And she wouldn’t thank him either. 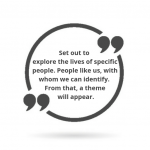 Writing Secrets: Excuse me, your theme is showingJo-Anne Richard's blog, Tips for Writers 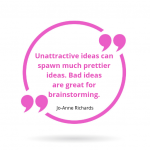