Writing Secrets: Beware the narrator who knows too much

I tend to advise new writers against using the god-like omniscient point of view when they start writing.

Using a distant narrator who comments on all the characters, and can see and understand everything, became much less common in the last century as we became more secular.

But recently, I’ve been coming across a spate of omniscience in the work of young writers. Commenting on this trend, New York Times writer Elliott Holt suggests it does not imply we have become less secular. In the modern world, our movements are tracked, our web searches leave cookie crumbs … we are being watched. There’s a sense of unlimited knowledge.

Perhaps, says Holt, omniscience taps into our collective fear about loss of privacy.

Sally Rooney’s Normal People, long-listed for the Man Booker Prize this year, perhaps confirms his view. Rooney has her characters comment on that sense of living public lives.

At the moment, they’re both engrossed in the Edward Snowden story, Marianne, because of her interest in the architecture of global surveillance, and Connell, because of the fascinating personal drama.

He reads all the speculation online, he watches the blurry footage from Sheremetyevo airport. He and Marianne can only talk about it over email, using the same communication technologies they now know are under surveillance and it feels at times as though their relationship has been captured in a complex network of state power, that the network is a form of intelligence itself containing them both and containing their feelings for one another.

“I feel like the NSA agent reading these emails has the wrong impression of us,” Marianne wrote once.

While omniscience may speak to and seem to portray something of this fear, I would still urge new writers not simply to use it as their default. I think it’s the hardest point of view to use well, and it can tempt inexperienced writers into bad habits.

Because they’re not showing us the world from the perspective of one character (at a time), it allows that all-knowing narrator to comment on characters, explain them to us and interpret their actions.

As I’ve been writing in recent blogs, readers become more immersed in the story, they feel it more powerfully, if they pick up the cues and do the interpreting for themselves, without explanation.

It’s not impossible to show more than you tell while using an omniscient view, but it is easier to tell – simply because you can. Your narrator knows everything. Why shouldn’t you pass that superior knowledge on to your readers?

It’s also easier to create a cast of ghastly people if you’re using the omniscient point of view, than a more attached and limited third person.

If you’re gazing down at your characters from a distance, you don’t have to like them. But then, don’t forget, neither do we.

That certainly doesn’t mean characters should be perfect, but if they’re all unrelievedly awful, we simply don’t care. We don’t stay friends with arrogant bastards, who are stingy with their money, time and emotion. Why would we continue to follow their fortunes in a book?

If you place yourself more closely within the consciousness of a character, I’m fairly sure you’ll soon become uncomfortable if that character is obnoxious. Used badly – which it often is when it becomes the default of an unpractised writer – the omniscient point of view can be an excuse for all sorts of writing iniquities.

Omniscience needs to be used well if it is to work. And even if you should decide that it’s the point of view that best serves your story, remember that you’re placing your readers at a far greater distance from your characters.

You have to work a great deal harder at forming a connection between us and them. 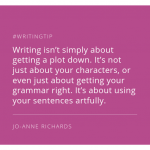 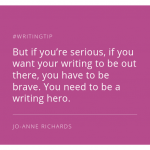