Writing Secrets: Why you need to trust your reader

The instant we meet people, we start computing.

We take in cues, without even realising it, and come to conclusions. Some of these we’ll adjust with time. Others we’ll confirm.

It’s the same with writing. Your reader is primed to take in the clues you feed her … because she’s used to doing it in her own life. When you remember that, you learn to trust your reader. You won’t have to stop and explain your characters to her.

The way a character sees the world shows us a whole lot more than her surroundings.

It’s like magic, really. One of the cleverest ways I know of showing us who a character is and what she does. When we have access to a character’s outlook, we grow an understanding of her. So much more satisfying than having an authorial busybody tell us what we ought to know.

At the start of Lily King’s brilliant novel Euphoria, we meet a woman who is just leaving the Mumbanyo (we know nothing more than that) by boat with a companion. The tribesmen throw something pale into the water after them, which may or may not be “another dead baby”. They play the death gong.

They are met by two western couples. One of the women says, “It’s Christmas eve, silly.” Nel thinks she could accept the “silly” more readily were she not wearing a filthy shift over Fen’s pyjamas.

What we do know is that she has lesions, a gash on her arm, an itchy rash she suspects might be ring-worm and a weak ankle. She is normally able to keep her discomfort at bay when working, but it kicks in hard with these women in their silks and pearls.

But it’s the way she views the two other couples which does so much more than give us a picture of them. It tells us everything about who she is and her life’s work.

The women wore stiff dresses and silk stockings, the men dinner jackets. They didn’t complain about the head, which meant they lived here, the men overseeing either plantations or mines, or enforcing the laws which protected them. At least they weren’t missionaries. She couldn’t have tolerated a missionary today.

One woman had bright gold hair, the other eyelashes like black ferns. Both carried beaded purses. The smooth white of their arms looked fake. She wanted to touch the one closer to her, push up her sleeve and see how far the white went, the way all her tribes, wherever she went, wanted to touch her when she first arrived.

As the women debate flirtatiously over which men may or may not be at the party that night, Nel says nothing.

In her mind, Nel was writing: ornamentation of the neck, wrists, fingers; paint on face only, emphasis on lips, dark red, and eyes, black. Hips emphasised by cinched waist, conversation competitive. The valued thing is the men, not having one necessarily, but the ability to attract one.

Only later, one of the women asks them: “Have you been studying the natives?” But by then we already know what she does – largely through the way she studies them. She’s an anthropologist.

Their last field trip, among the Mumbanyo had not gone well, but then … we knew that. 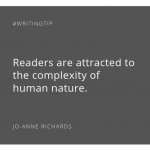