Writing Secrets: Choose a character you can embody

“I’m just so happy,” one of our mentoring participants told us recently. “I can’t tell you how happy I am. The writing’s flowing and … it just feels right.”

We told her that we were happy to see her so happy – because four months ago she was weeping.

She joined our programme at the beginning of the year – with a very ambitious idea. In fact the scope, number of characters and time-scale were so vast that we persuaded her to narrow it down.

She was still left with a very difficult task: writing about a young man (which is difficult enough if you’re a woman) in a war situation, which she herself has never experienced.

For two months her young man struggled: he struggled to come alive, his feelings struggled to make sense to us, and his actions struggled to ring true. His environment didn’t contain the details which would make us believe in his world.

He just wasn’t working. That was as plain to her as it was to us. He was making her miserable.

So we sat her down and made a radical suggestion. Put him aside – maybe not forever, but at least for now. For a first book, it was just too big a task to tackle a character, and a story, so far removed from her own life.

Turns out she did have another story idea tucked up her sleeve, one that was far closer to her own experiences. And I think she was relieved to have someone else suggest she drop him. There was no shame in it.

Since then, her writing has transformed. She’s writing with more confidence and flow. Her characters ring true. We understand their impulses and their actions make sense to us.

If you’ve spent a lifetime researching suffragettes or the first world war, you might well be able to slip inside the skin of a character in the suffrage movement or a soldier in the trenches. Otherwise, especially if you’re embarking on a first book, you’ll have an easier task if you stick to characters closer to your own experiences.

After all, just writing is hard enough. 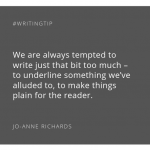 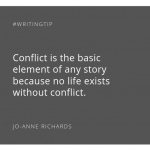