Monday Motivation: This is how stories begin…

In the spirit of innovation and invention, let’s devote the next five minutes – yes, while it might take me an hour or two to compose these little missives, that’s all it takes for you to gobble them up – to a little thought experiment.

What I’m going to do, in just that hour or so of frenzied composition, is invent a series of scenarios that could conceivably form part of a longer narrative; or inspire a more ambitious story; or, more simply, amuse you. These won’t be perfect (whatever that means), but I hope they’ll be provocative…

Imagine that your character is making a phone call to someone of significance to him, a partner, or a mentor, or a close relative. He’s confessing to an offense he’s committed, either in the distant past, or more recently. It might be an affair he slipped into; or a crime he committed; or a betrayal he’s guilty of. It’s taken courage for him to make this call, and it takes courage to spell out the nature of his misdemeanor and his feelings of remorse.

Understandably, he’s taken up by the moral and emotional effort this demands, and it’s only when he’s finished the call that he realizes that the person he’s been talking to has been remarkably silent through his monologue. “Hey,” he says, a little sharply. “So what’s your response? Can you forgive me?” Silence. Then he hears the clatter of the phone being picked up, and his interlocutor says, “Sorry. The doorbell rang. A couple of Mormon missionaries. It took me forever to get rid of them. Now, you said you had something important to tell me?”

Someone remarks to your character that they spotted her identical twin at a party. Mistaking her for your character, they approached her – only to be met with incomprehension. Your protagonist insists that she doesn’t have an identical twin. In fact, she says, she’s an only child. Well, says her friend, fact is, she’s got a doppelganger. She phones her surviving parent who is discombobulated by the question she poses. She says, she must know whether or not she gave birth to identical twins – and she most definitely knows she didn’t. Having one obstreperous daughter was quite enough, thank you.

Then, in traffic one day, your character sees a woman cross the road at an intersection. It’s her double… The near misses continue until one day she tracks the woman down by making inquiries of the person who hosted the party at which she was first spotted. She is indeed the mirror image of your heroine, identical in every respect. She is as surprised as your girl is. They compare details. Different names, same birthday – but they were born on different continents…

Your protagonist is having a picnic on the shores of a placid lake with her partner when a man staggers out of the woods bleeding badly from lesions all over his body. He collapses just metres away and despite all your characters’ efforts, dies – but not before he utters some more or less incomprehensible warnings about something in the woods… Alarmed, your two characters head back to their car, intending to call the authorities, but find that the car won’t start.

Now near panic, your guys prepare to flee back to the road on foot. But then a helicopter appears above the trees and settles on the sward. Two military men in full battle armour hustle them into the chopper, which lifts off at once…

Right, that’s it. Three scenarios that popped, bidden, into my head. Each contains enough unanswered questions to drive the reader to read on. Each contains enough mystery to set a writer the perplexing task of working out what could plausibly happen next (and, of course, what happened before). Each constitutes an inciting incident – triggering three very different kinds of story.

Now here’s a fourth scenario. You sit down at your notepad or laptop, and in just a few minutes hammer out the bare bones of a single provocative scene of your own. For the moment, don’t worry about what happens next. Just focus on developing a scene full of tension and potential. Only then consider the question of how the story might unfold. 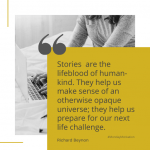 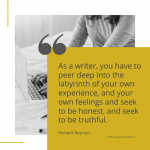