I’ve not been a great Tarantino fan – not, at least, since the Kill Bill duet, which left me feeling unengaged and rather bored with all the operatic but strangely bloodless violence.

But then, thanks to the clamour of an adoring critical chorus, I reluctantly bought a ticket to see Once Upon a Time… in Hollywood.

But what I got was one of the most extraordinary character studies of the year – I’d even go so far as to say, of the decade.

And it’s here that I get to the point I want to make: Character is, we’ve all heard a thousand times, story – and the more layered the character, the more interesting the story. In fact, would it be a stretch to say that story almost – but not quite – becomes irrelevant, when the characters who carry it are as complex and as fascinating as these two?

So you can see that I came away dazzled by Tarantino – who wrote as well as directed – and his two leading men. But it took an article in the New York Times to define precisely what it is about the portrayal of these two characters that made them so pivotal to my experience.

In an article on the ten best performances of the year on film, Wesley Morris, one of the Times’s film critics, wrote this about DiCaprio’s performance:

“DiCaprio has to hold onto the movie’s satirical showbiz insanity as well as Rick’s alcoholism, square bravado, insecurity, faded stardom and private misery.”

Think about that for a moment. DiCaprio created a character who was at once an alcoholic, exuded a sense of false bravado and insecurity, aware of his fading celebrity as a star, and filled with private misery. And on top of all that, he has to work to satirise Hollywood itself, filled as it is with a kind of unfocused dementedess – without sacrificing the humanity of the character.

The supreme irony – and DiCaprio’s supreme achievement – is captured by Morris in his final observation:

“Rick is one of the most mediocre actors I’ve ever seen. But it takes a real maestro to summon all that talentlessness and keep knocking you out of your chair.”

Brad Pitt’s Cliff Booth, acts as foil to Rick’s complexity: he’s a highly competent Hollywood dude, as I suppose you’d expect a stuntman to be, on the one hand serving as what the NYT calls “a human security blanket” to Rick, and on the other as a super-effective shield against the threats posed by the Mason clan.

So bear all this in mind, when you construct your next character. Don’t just think of her dominant trait – overweening ambition, say – but also the other facets in which her personality and her character are reflected: her nagging sense of self-doubt; her sentimental attachment to “outmoded” notions of honour; her deep sense of grievance ignited when a colleague snatches the promotion she’d been after; her inability totally to trust others and especially her husband… And so on.

You can see that each of these adds a dimension not just to the character, but to the story. Each character trait creates story possibilities that you can happily exploit.

And if you haven’t yet seen it, then make a plan to watch (and study) the lovely nuanced performances of DiCaprio and Pitt. They constitute a master-class in character creation.

P.S. Just thought you might like to know: there are stirrings of a move to resuscitate the Apostrophe Protection Society. The official website made this announcement: “Due to the recent decision made by John Richards www.apostrophe.org.uk has had a massive 600-fold increase in demand. This has resulted in our server’s bandwidth being exceeded and, as a result, we have closed the full site until early January 2020. We apologise for disappointing you but do come back in the New Year!” Heres crossing finger’s!

P.P.S. Over the holiday season, we’ll be posting some of your favourite Monday Motivations drawn from 2019’s archive. We’ll chat again in the new year. 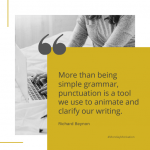 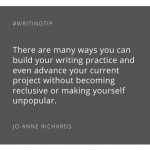 Writing Secrets: Holidays can be creative (no, really).All About Writing