I want to celebrate, but lament the demise of, the Society for the Protection of the Apostrophe, news of which calamitous event was announced by its 96-year-old founder, John Richards. He established the society in 2001 to advocate the correct use of what he called the “much-abused” punctuation mark.

But now, he declares that “ignorance has won”. London’s Evening Standard reports that he has decided to close the society. “We, and our many supporters worldwide,” he said, “have done our best but the ignorance and laziness present in modern times have won.”

Well, at 96 I reckon you’ve earned the right to lay down your standard – but there’s no reason the rest of us who feel passionately about the humble apostrophe shouldn’t march forward with banners held high.

Think of a world in which the apostrophe has bitten the dust. Think of a paragraph like this one:

Its not often that Hannahs aunt, the well-known artists model, poses in the nude, especially in the cold season. Its her belief one should bundle up against winters chill. “But whodve thought,” she sometimes says, “that the artists Im employed by find more inspiration in me wrapped than unwrapped.”

Now, call me antediluvian, but the thought of a world without apostrophes sends a chill up my spine. Do you share that feeling?

Of course, it’s not only the absence of the apostrophe that’s so criminal – but its frequent overuse and abuse. Consider this paragraph:

St Pauls is on the very margins of the City of London, with it’s army of stockbroker’s whose existence is predicated on annual bonuses amounting, in some case’s, to millions of pounds’.

If ignorance and indifference have caused John Richards to yield in his twenty-year battle on behalf of the apostrophe, it hasn’t dimmed his passion for the comma, on whose behalf, he now declares, he is willing to pick up the cudgels. “The use of the comma,” he says, “is appalling,” especially on newspaper websites. For a sub-editor, this is perhaps the unkindest cut of all.

So let’s join hands, we happy band of punctuation pedants, and fight for the rights not just of apostrophes and commas, but of all the other bruised and battered marks we use to animate and clarify our writing.

P.S. Would it be insulting to you, my highly literate and punctuationally sophisticated readers, to reprint here Richards’ three simple rules for the correct use of the apostrophe? I’ll risk it:

Apostrophes are used to 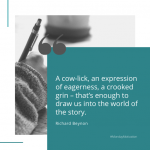 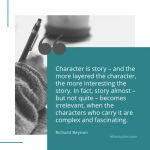