Writing Secrets: A piece of writing is like a set of dominoes

A piece of writing is like a set of dominoes. Overset one aspect and you overset all those that follow.

We come across this problem a great deal in our mentoring programme. Each scene follows logically on the last and leads logically (or psychologically) to the next. Each piece of the story impacts on the next and carries it forward.

The problem with this is that, if you seek advice when you’re already some way into a piece of writing or, by yourself, discern a fundamental problem, you’re going to have to be prepared to go back and rework.

It’s important to distinguish between scene problems and story or character problems. An individual scene which doesn’t quite work can safely left till later. Carry on writing…

But if you continue when there’s a glaring hole in the plot, a story that doesn’t work at some level, or characters who don’t ring true, you will compound the problem.

This highlights different levels of editing. Some problems can be fixed with a tweak or two, and those less substantial changes can be left till the second draft. At the other extreme, you might need to regard what you’ve written as raw material and start from scratch. What you’ve written is never wasted though. It’s firmed the idea up in your mind and got a lot off your chest.

Sometimes it’s somewhere in between. You need to set something up earlier and rewrite a section. But that will invariably mean reworking the scenes that follow. For instance, perhaps it doesn’t make sense, in story terms, if your protagonist doesn’t care a fig that her boyfriend breaks up with her. She might need to care – otherwise there’s nothing at stake. Why should we care either? But then, all the scenes that follow are impacted by that one decision.

There’s no solution to this except that, if you’re not sure of something, try to check on it early. And if you do write half a draft before you discover that something’s wrong, you just need to realise, hard as it is: that’s life … and that’s writing.

how to be a writer, how to fix a bad first draft, how to write a novel 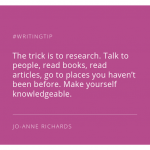 Writing Secrets: The problem with the holy trinity of writing adviceJo-Anne Richard's blog, Tips for Writers 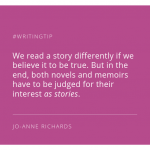