Here’s a conundrum. One of our mentoring participants tried to solve one problem and, in the process, created another.

As I mentioned last week, you should try to avoid long, static conversations, particularly those that occur over the telephone.

In this instance, he felt he couldn’t avoid one. To create interest, and inject a little dynamism, his perspective character heard a thump and raised voices, one of which he thought he recognised, through the phone. The other character was speaking from his office, where he was the boss.

He apologised to our perspective character for the noise and continued.

Okay, it broke up the dialogue and raised our interest, but it created expectations in our mind. It’s a Chekhov’s gun moment. Remember that? “If in the first act you have hung a pistol on the wall, then in the following one it should be fired.”

We expect that something is going to happen, which has to do with the bang and the argument in the background. If it is never mentioned again, we feel cheated.

However, perhaps he could solve it in the following way: the boss could excuse himself briefly and come back with, “You won’t believe what I have to put up with,” and a brief description of two of his employees coming to blows over a missing stapler.

Our curiosity is satisfied – and we enjoy a small comedic absurdity, which breaks the tedium of the phone conversation, but doesn’t detract from the dramatically serious information being exchanged. Handled well, it could also show us more about both characters. 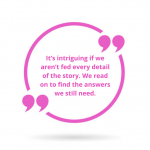 Writing Secrets: Long conversations can be boring – in life and storyJo-Anne Richard's blog, Tips for Writers 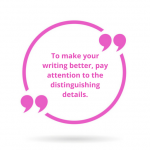