Writing Secrets: Long conversations can be boring – in life and story

By Jo-Anne Richards
Posted May 23, 2018
In Jo-Anne Richard's blog, Tips for Writers
Writing Secrets: Long conversations can be boring – in life and story2018-05-232018-05-20https://allaboutwritingcourses.com/wp-content/uploads/2016/12/final_logo_small.pngAll About Writing Courseshttps://allaboutwritingcourses.com/wp-content/uploads/2018/05/copy-of-writing-secrets-92f05-5.png200px200px
0

It’s a perennial problem for writers – the long conversation which reveals essential information.

The solution? Well, the short answer is: try to avoid them if you possibly can, particularly if they happen over the telephone, which makes for a very static scene. It’s much stronger and more dynamic to bring your characters together so they can talk face to face.

I have just advised a mentoring participant to do just that: a man’s ex-wife leaves for a trip in the Caribbean before a revelatory conversation between them, which must therefore take place over the phone. The conversation isn’t too long, but it would be much more dramatic if it took place over a breakfast, say, just before she was due to leave.

Dramatically, it doesn’t matter when she leaves – only that she should, in fact, leave.

But even face to face, a very long conversation can be tedious. There’s no simple solution except to say that you should try to be creative. Surely there are other ways at least some of that information can be revealed. It’s usually more suspenseful to allow us access to information in small increments rather than all at once. It’s intriguing if we aren’t fed everything. We read on to find out the answers we still need.

If one of the characters is explaining how something occurred, there’s another way to avoid the long speeches, and that is to segue into a scene from the past which shows us, more graphically, what he’s explaining.

In other words, if she’s confessing to murdering her extremely annoying husband, allow her to start, then shift into a scene in which we see her pushed to her limits by the way he eats his egg, and reach for the bread knife.

If this isn’t possible and it can’t be avoided, make sure you break up the conversation as much as possible. The participants must be doing things, which show us more about them and their state of mind. The perspective character notices the details around her – about their environment, and the other characters.

Tana French does this very neatly in one of her excellent Dublin murder squad novels. I won’t say which, lest I ruin it for anyone who has still to read it. As it is, I’ll try not to commit any egregious spoiler sins.

A group of people is revealing how they covered up the murder committed by one of them. Firstly, we’re dying to know: we’ve been waiting three-hundred pages to find out. It stands to reason, we’re more tolerant of long conversations later in the book – when we’re dying for answers.

There are four of them: all doing different things. One of them is sewing – something she does often. As the conversation progresses, she struggles, making several stabs before managing each stitch, eventually creating large, clumsy and ragged stitches.

French uses the reactions of the different characters, as well as the perspective character’s awareness of the environment. As you can see from the following paragraph, this makes us feel the atmosphere, so that we are immersed in this claustrophobic situation too, but it also shows us more about how she herself is feeling.

[Character A] gasped, a terrified, childlike sound. The light in the room had changed, the air had tilted, pressure shifting, all those little eddies gathering themselves together and whirling around some huge focal point.

Then there are the dynamics between the characters. Once so close, they have been torn apart by their actions, and divisions are appearing everywhere.

[Character B] finally lost her temper. ‘Fuck you, you self-righteous bloody…’ She shot up off her chair and fired the doll straight at [Character C], one fast vicious move; he threw up a forearm reflexively and smashed it away into a corner. ‘I warned you. What about you? Using [Character A] when you need him…

All of this breaks up the revelatory information. This conversation is not there simply to relay information from the past, which would be static. It’s a very present scene in which things are changing and happening – as a result of the information being relayed. That makes the difference.

Finally, though we discover what they did, how they dealt with the body, what steps they went through, French withholds the actual murderer until late in the conversation, which means we are impelled forward because we are simply dying to know.

It’s masterful because what could have been a rather static recount of what happened becomes an active and suspenseful scene in which people are doing things. Their changing dynamic takes the story forward, rather than simply wrapping up the past. 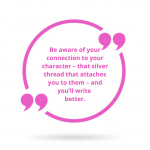 Writing Secrets: The silver thread between your character and youJo-Anne Richard's blog, Tips for Writers 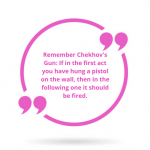