Writing Secrets: When to switch off a manuscript’s life support

There are times when you just have to let go of a project.

Last week, I spoke about having faith; putting in the hours even though your manuscript is a horribly defective creature which looks like it might well slip away, incapable of life, let alone the ability to grow hale and hearty.

You have to believe. You need to care enough to put in the hours, weeks, months, years …

And yet, in our mentoring programme, we sometimes – rarely, I admit – counsel a writer through the decision to let a particular project go and start again, or perhaps embark on another project altogether.

In the two instances that come to mind, women were attempting to write about men – one in the military (a world she knew nothing about), and the other in the early years of the twentieth century, in another country.

Neither of these stories was working. Both women felt stilted by their lack of knowledge and what they did write didn’t ring true. They were stuck, and unhappy.

I’m not saying it’s impossible to write a story about someone from a different milieu, or century or gender. But then you must be prepared to put in even more time and effort. You need to research the world to within an inch of its life. You must know it as well as you know your own neighbourhood – the way people speak, and think, and express themselves. You need to know how they live and the tiniest details of the world around them.

If this is a first book, it’s perhaps not the easiest choice. And this was our advice to both women. Don’t say goodbye to this book forever. Perhaps just put it aside and tell something closer to your world and your own life. You can always pick it up later when you’ve grown in confidence and are ready to take on the commitment necessary to embody a character and a world so different from your own.

We have also been known, gently, to suggest that a first draft be regarded as raw material for a new start on a project. That can be the kindest advice. The work done is never wasted. If this is a decision you end up making (as I have, in the past), you’ll have at your disposal a repository of material which you will draw on as you move forward with a far healthier and more robust second draft.

That’s what writing is about, and if you regard yourself as a writer, you have to be prepared for total rewrites. They’re more common than you think.

How do you know, though? How will you tell if your work-in-progress requires faith and continued investment, or whether it’s time to switch off the life-support system?

There’s no easy answer. Sometimes you just know. Both of the women I mentioned above reacted with relief to our suggestion that they store their projects in virtual bottom drawers. “Oh thank goodness,” said one. “I think I just needed someone to tell me it was okay.”

If you’re not sure, then don’t ask your best friend, or your partner. You’ll never get an honest answer. Seek out a fresh eye – but let it be a knowledgeable eye, someone who is used to assessing manuscripts. It’s hard for a lay person to see through the inevitable first draft flaws to the nugget beneath.

There is a time to have faith, hold your breath and keep going. But if you’re not going anywhere, if you have no feel for your project, it might be better to put it aside. You can tell yourself it’s resting, as actors do.

blogs for writers to read, how to be a writer, how to know when to let go of a writing project, writing the first draft 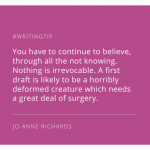 Writing Secrets: On darlings, and why they deserve to dieJo-Anne Richard's blog, Tips for Writers